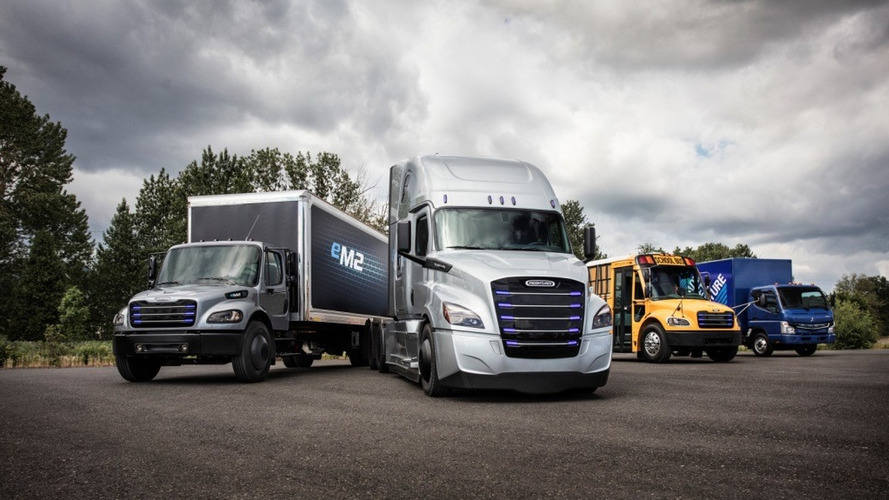 The biggest truck maker on the planet is going electric.

Daimler has unveiled its first all-electric lorry, which it hopes will be just the thing to take the fight to Tesla's already-announced electric semi truck.

The German company, which owns Mercedes, is the largest truck maker in the world, so the announcement of its first electrified products in the segment is an important step. Daimler currently has a 40 percent share of the US lorry market, which is said to be worth close to £30 billion. So definitely worth investing in, then.

The firm has revealed its new 18-wheeler Freightliner eCascadia, which is slated to begin production in 2021, two years after the Tesla truck is supposed to hit the market. The European contender will start at a disadvantage, however, because it will only have about half the range of its American counterpart at 'just' 250 miles.

Nikola is suing Tesla over its electric truck

Unmarked police lorry has caught out some unsuspecting motorists

Also unveiled by Daimler was the medium-duty Freightliner eM2 106, which is set to have a range of around 230 miles on a full charge. The eM2 106 has been designed with local distribution in mind, which is something that analysts are calling the 'sweet spot' of the electric lorry revolution. Tim Denoyer, who is a senior analyst at consultancy firm ACT Research, says that it 'makes an enormous amount of sense because it doesn’t have the long-range requirements, yet puts on enough miles on a daily basis where you can get fuel savings'.

Illinois-based Navistar International Corp is reportedly also developing an electric truck in partnership with Volkswagen and has set aside around £1.3 billion for the project which would be planned to enter production by next year. It is also working on autonomous vehicles and cloud-based drive systems which it hopes to implement by 2022.