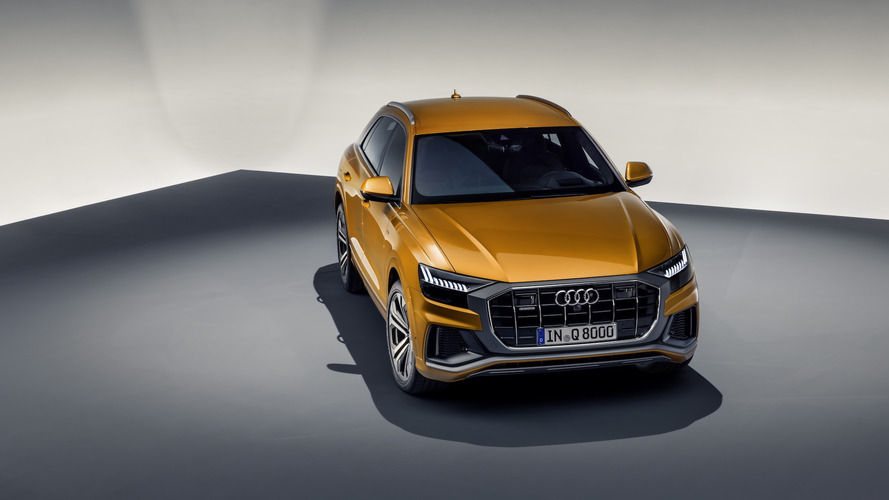 The coupe-like SUV is set to go on sale in September.

Audi has just unveiled its contribution to the ever-expanding range of SUV-coupes – BMW might have invented the niche with its gargantuan-but-impractical X6, but Audi is hoping that its Q8 might be a little sleeker.

Depending on how you look at it, Audi is either 10 years late to a competition that BMW has got sewn up, or it could be that the niche is about to go mainstream. Clearly the Volkswagen Group thinks there’s legs in the format – Lamborghini has only just revealed its almost identical Urus SUV.

Audi says that its Q8 will offers its owners the ‘best of two worlds – the elegance of a five-door coupe and the versatility of a large SUV’.

Can it manage that? We’ll have to hold off judgment until we get a go behind the wheel, but the new Q8 is about the same size as the Q7, albeit with a more sloping roofline. It offers a wheelbase of just under three metres and comes in at 4.99m long, 2m wide and 1.71m tall.

Styling is predictably aggressive, with the front end first seen on the A8 that features a large single piece grille with horizontal chrome bars. LED lights come as standard all round and the back end features a full-length strip of lights.

Audi Q8 Spied On Video Racing To The Ring

On a practical level, Audi says it has designed the boot of the Q8 to take two golf bags sideways. Overall, the boot will hold 605 litres, which increases to 1,755 litres with the seats folded. The boot lid is electrically operated as standard, and can even be optioned with an electronically retracting parcel shelf.

The interior styling of the cabin is recognisable from recent efforts from Audi, notably the new A8. The Q8 gets two prominent touchscreens on the centre console, with Audi’s excellent digital instrument panel.

Check out the A8 saloon:

The Q8 has made extensive use of aluminium to keep weight down – the car comes in at 2,145 kg when equipped with the 3-litre diesel engine that’s available at launch, which is an impressive effort.

That engine produces 282 bhp and 442 lb-ft of torque and transmits power to the road via permanent four-wheel drive and an eight-speed automatic transmission. The 0-62 mph run is taken care of in just 6.3 seconds.

At the beginning of 2019 the engine range will be bolstered by a less powerful version of the 3-litre diesel and a 3-litre petrol that produces 335 bhp.

The Q8 is set to be built in Bratislava and will go on sale around September 2018. UK specs and prices haven't yet been announced, but check back at uk.motor1.com for the latest details.