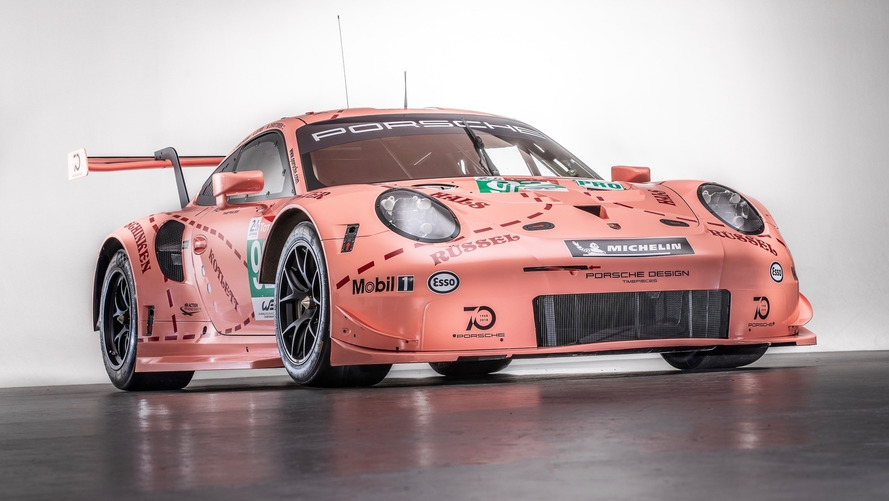 Porsche has announced that it will revive some classic liveries for the 2018 Le Mans 24 Hours race, which kicks off in less than two weeks’ time.

As part of the brand’s 70th anniversary celebrations, two factory-run 911 RSR racing cars will be adorned with iconic colour schemes from the 1970s and 1980s.

The number 91 car, which is to be driven by Italian Gianmaria Bruni, Frenchman Frédéric Makowiecki and Austria’s Richard Lietz, will wear the blue and white colour scheme of the old Rothmans-sponsored Le Mans-winning 956 C cars from the early 1980s.

The number 92 car, meanwhile, will be driven by French racer Kevin Estre, along with Laurens Vanthoor of Belgium and Danish driver Michael Christensen, and will parade the famous ‘Pink Pig’ design from the 917/20 of 1971.

Porsche has built an exact replica of its very first car

Under the new designs, however, both of the impressive race machines are identical, and will represent two of four 911 RSRs that are set to be fielded by Porsche on the large grid at the Circuit de la Sarthe. The other two cars, numbered 93 and 94, will be decked out in Porsche’s more usual white, black and red livery.

Six further 911 RSRs will also line up on the start line, although these cars will be fielded by customer teams, rather than Porsche itself.

‘With these much-loved designs, we want to thank our loyal supporters who have cheered for us both on and off the track at every race, but particularly at Le Mans, where we as record winners with 19 outright victories received incredible support every year,’ said Dr Frank-Steffen Walliser, Porsche’s vice-president for motorsport and GT cars.