Formula 1 is pushing for bigger wheels in 2021 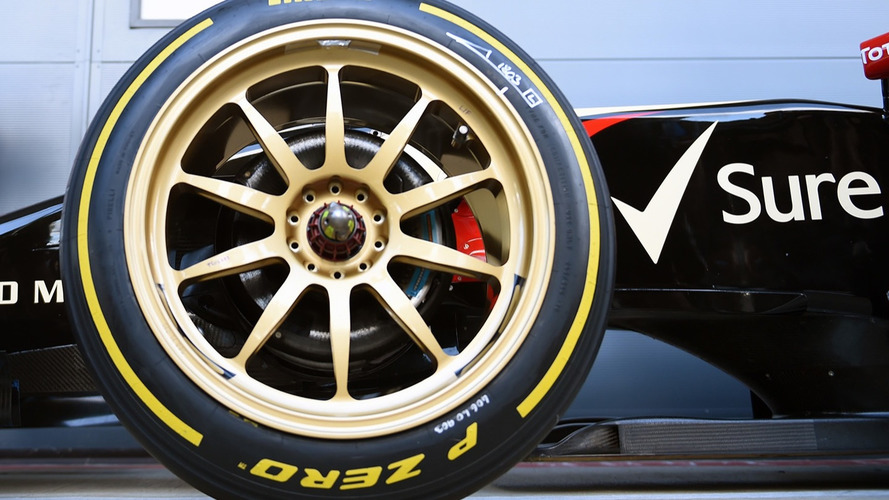 Does size matter? F1 thinks so.

A switch from 13-inch to 18-inch wheels is set be part of the 2021 F1 rules being formed by a team of engineers working under Ross Brawn, and reporting to the FIA, according to the latest rumours. One F1 insider told Motorsport.com that is is now 'more likely than not' that the move will be made.

When asked if he agreed that was the case, FIA race director Charlie Whiting said: 'I would say so. It is part of the package that we are discussing.'

Pirelli has been pushing for the change for several years, and has even demonstrated concept tyres, with Charles Pic running them on a Lotus at Silverstone in 2014 and Martin Brundle trying them on a GP2 test car in Monaco in 2015. The company believes that low-profile tyres, as already seen in the WEC and Formula E, have more in common with road car technology than the current 13-inch spec, and would be better for marketing purposes.

The argument against a change has always been that it would have a major impact on suspension design, and hence add to development costs, but opinion has now swung in favour. Some teams have even suggested that the move should be made as early as 2020, with the current cars. However, the consensus is that it would be logical to wait for the big package of changes that will come in 2021.

Pirelli's exclusive supply contract ends in 2019, and a move to 18 inches would be built into any future tender, which will be open to rival manufacturers. The complication for any newcomer is that they will potentially have to develop 13-inch wheels for a single season in 2020, before the move to 18 inches. Pirelli CEO Marco Tronchetti Provera confirmed in Monaco that the Italian company is ready to make the change. 'We are open,' he said. 'Obviously they have to find the right regulation, and have the teams ready to adopt it.

'There are a number of issues of aerodynamics, of suspension and so on. When the teams are ready, we are ready. For us it is always technology. We are happy with 13, we are happy with 18. Tyres are more visible, the bigger they are, the better it is. But the technological challenges are different.'

The priority for Pirelli will be to organise a suitable test programme, which will require a 'mule' car or cars with modified suspension. 'At the moment we haven't discussed this in detail yet,' Pirelli F1 boss Mario Isola told Motorsport.com. 'Because it's not just the tyre regulations that are missing, but all the regulations.

'We said that we are ready to do whatever they ask, with the proper time and testing. This is our position. We have to make a proper plan. In the past we made different tyres, we made wider tyres, we are always trying to follow what are F1's requirements. But we'll need a proper car to test. It's a similar situation to 2016, with the wider tyres.'

Isola believes that the move should wait for the new cars in 2021: 'I think that 2020 is too close for such a big change. It doesn't make a lot of sense considering that in 2021 we will have other changes, so it's better to do it all together.'