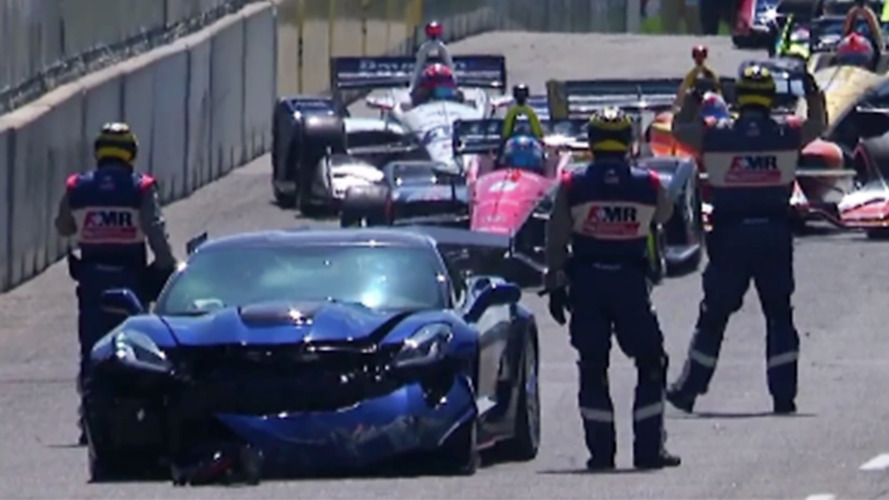 Spin on Sunday, sell on Monday?

General Motors' head of product development, Mark Reuss, was involved in a rather embarrassing incident at the Detroit Indycar race this weekend – the GM exec was behind the wheel of the Chevrolet Corvette safety car, and crashed into a wall at the head of the field.

Reuss shunted the Corvette on the parade lap for the second Indycar race at the Detroit Grand Prix, bringing the race to a halt, with the entire grid coming to a stop behind him. Hapless Reuss, whose mishap was televised live, lost control under power and over the crest on the exit of Turn 2 of the Belle Isle track. Tracking behind the two-seater IndyCar, the Corvette nosed hard into the concrete retaining wall, and the field of 23 racecars came to a halt. Within seconds, Reuss’s Wikipedia page had been hacked, adding to his job title 'and a professional pace car crasher'.

Once the debris had been cleared – and only polesitter Alexander Rossi had run through some of it – the cars were refired by the AMR Safety Team and returned to pitlane. Speaking to ABC, Rossi’s strategist Rob Edwards said of the debris from the shunt: 'Alex thinks he avoided most of it. I hope we don’t have a cut tyre'.

The usual driver of the safety car, professional racing driver Oriol Servia, was relegated to the backup car, and forced to watch the events unfolding from the pitlane. Veteran team owner Roger Penske said of the situation: 'We’ve seen the leader at Indy spin out on the pace lap, this isn’t quite as bad when you’re in your race car. It’s too bad, but come to the racetrack and you’ll see anything.'

Check out these Indycar stories: