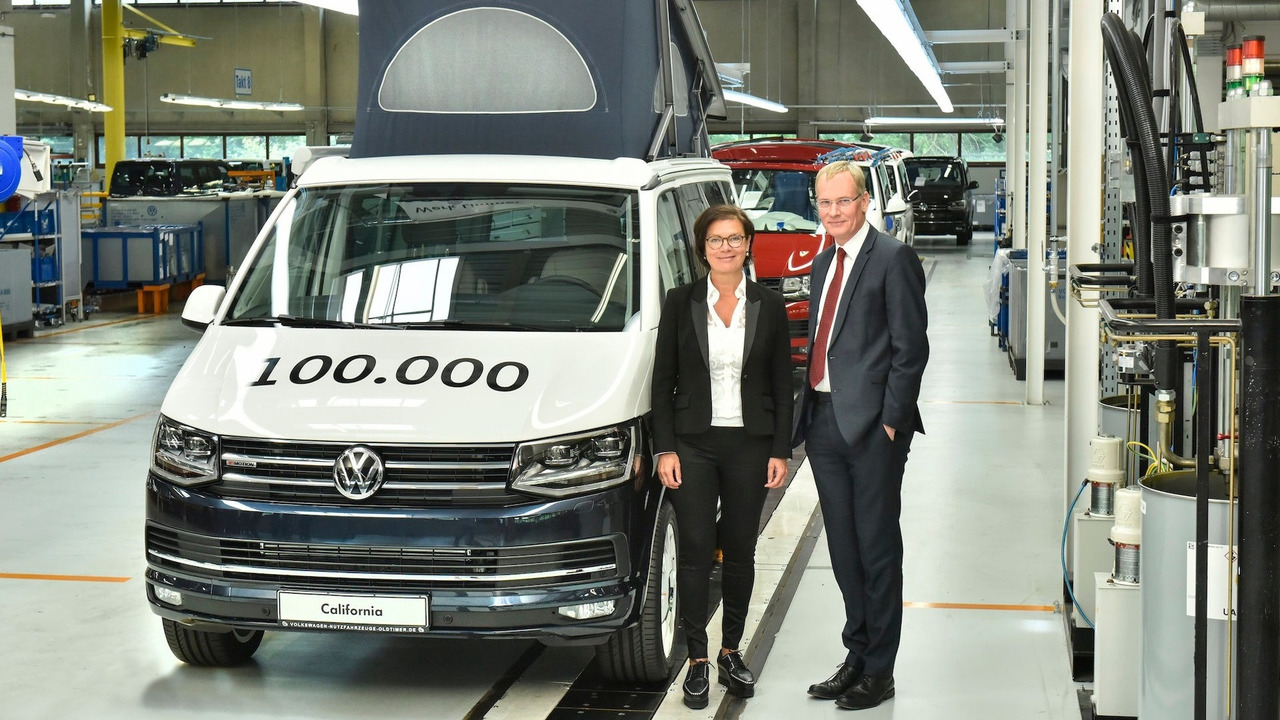 That number makes the California one of the most successful mobile homes in its class.

Volkswagen is celebrating 100,000 Californias off the line at its plant in Hannover, making the camper van one of the best-selling, most successful mobile homes in its class.

The lucky camper off the production line was built in California Ocean trim and comes complete with a 2-litre TSI petrol engine producing 201bhp matched up with a seven-speed DSG gearbox and 4Motion all-wheel drive. The exterior is finished in a two-tone Candy White/Starlight Blue Metallic finish, with a matching dark blue pop-up roof, sides and awning. There’s even a full kitchen unit, with wood-effect flooring.

'We could hardly write or continue this story of a legend's success in any better way: because 100,000 vehicles also mean 100,000 customers living their dream of independence, travel and enjoyment with the California,' said Eckhard Scholz, chairman of Volkswagen Commercial Vehicles. 'The California is an icon among camping and leisure vehicles, the most popular and best-selling mobile home of its kind.'

The Hannover plant where Volkswagen builds the California stretches to nearly 13,000 square metres and employs a workforce of around 300 people working in three shifts. The standard T6 vans come to Limmer by truck, and are hand-fitted with California customisation features, both inside and out – including the much-loved pop-up roof.

Ironically, while the California starts in the UK from £39,651 on the road, buyers who actually live in California can't buy the camper can because it isn't available to buy in the United States. VW has no plans to make any changes to the vehicle itself over the next couple of years, but the German carmaker is planning to introduce an electric version based on its ID Buzz concept in 2022.

Dr Eckhard Scholz, Chairman of the Brand Board of Management of Volkswagen Commercial Vehicles said at the celebratory event: "We could hardly write or continue this story of a legend's success in any better way: because 100,000 vehicles also mean 100,000 customers living their dream of independence, travel and enjoyment with the California. The California is an icon among camping and leisure vehicles, the most popular and best-selling mobile home of its kind."

Addressing the workforce, Scholz said: "This success is first and foremost your success. For with your passion and expertise you not only create automotive value 'Made in Hannover' every day, but each of you has also contributed and continues to contribute to the fact that this vehicle has achieved cult status for multiple generations and will remain in the future a mobile home with built-in holiday joy."

Bertina Murkovic, Chair of the Works Council: "Hannover is and remains the home of the Bulli. And that includes the California, a very special and unique vehicle that you, dear colleagues, build using your skill and know-how, thus making you too a part of this story of success. The decision to make the California in Limmer has been proven to be right. From initially 60 employees here on the Limmer site, there is now a workforce of around 300. My thanks go to the entire team and the main Hannover site, who with their great commitment have together made the 'Cali' a cult vehicle!"

Volker Eissele, Head of Customized Solution at Volkswagen Commercial Vehicles: "We are continually enhancing our best seller, fine-tuning its design and perfecting its engineering. As a result, the California offers through its diverse array of practical functions unlimited scope for travelling and unparalleled flexibility in everyday life."

California production
This home on four wheels began its story of success 30 years ago. The
California was developed jointly with 'Westfalia'. It was based on the third
generation of the Transporter and initially produced in Rheda-Wiedenbrück. Since 2004, the California has been developed and made by Volkswagen Commercial Vehicles exclusively at the Hannover-Limmer plant. The California production facility covers approximately 13,000 square metres.
A workforce of around 300 is employed there, operating in three shifts. The base vehicles come to Limmer on trucks from the main Hannover-Stöcken plant. The bodies are prepared for the next stage of production
and thus have the necessary cut-out for the pop-up roof. Working by hand, experts fit out the California (prices from €43,221 incl. VAT) to customer specifications. Just recently, for being the most popular compact camper van, the California was awarded the title "Mobile Home of the
Year 2018". Over 30 years, since the California was launched, more than 160,000 units have been produced in total, 100,000 of them in Hannover-Limmer.