Our spies were also able to take a quick look inside while the prototype was refueling.

It’s safe to say that Aston Martin has a lot on its plate these days – between working on the new Rapide AMR, developing the DBX SUV and preparing the Valkyrie hypercar with Red Bull Racing, the folks down at Gaydon are also bringing back the DBS name with the new Vanquish replacement. The hardcore DBS Superleggera coupe is set to be revealed in June and will be joined sooner or later by this, the Volante.

If you’re a fan of the DB11’s styling in its two coupe and Volante flavours, there’s a good chance you will also appreciate the pair of DBS models as the two will build on the elegant design of the grand tourer while adding a few more aggressive design cues. This work-in-progress prototype of the droptop model flaunts four exhaust tips, with the outer ones being visibly smaller. Also noticeable is the deployable spoiler at the back and the black tape applied to the bonnet. 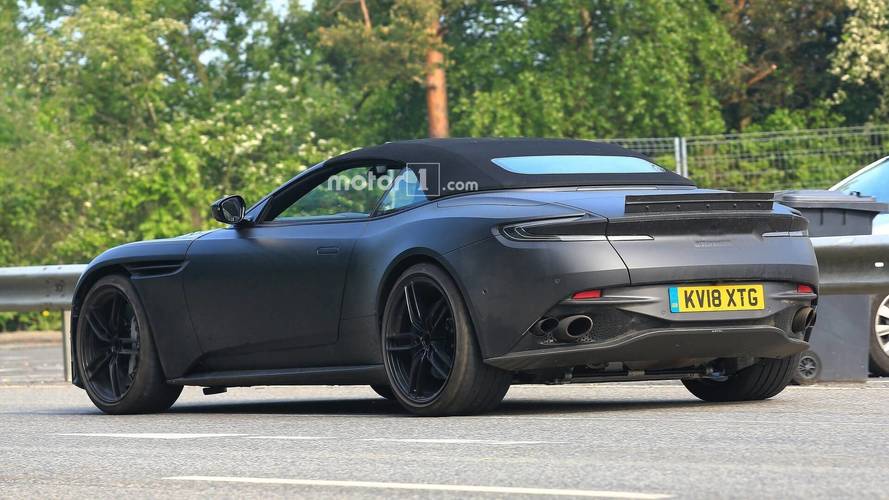 Speaking of which, lurking underneath that long and imposing bonnet is a mighty 5.2-litre twin-turbo V12, which will likely produce more than the 630bhp and 516lb ft of torque offered by the recently introduced DB11 AMR.

While the prototype was getting a drink at a petrol station, our spies were able to take a quick look inside the cabin and photograph the lower section of the centre console. It goes without saying the cabin will be largely carried over from the DB11 Volante, but we do notice the red stitching to emphasise that the car is a bit more special than the standard model.

Aston Martin hasn’t said when it will reveal the DBS Superleggera Volante, although hopefully it will be ready for the summer of 2019 as we’re expecting the soft-top to follow shortly after its coupe counterpart.