F1 is going to experiment more with new TV graphics 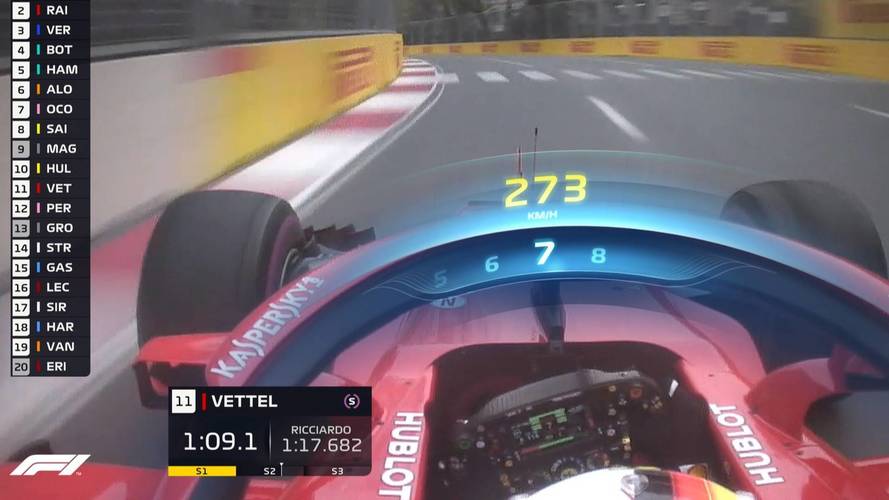 Covering up more of the Halo can only be a good thing.

Formula 1 will introduce new data into the Halo television graphic that made its debut over the Azerbaijan GP weekend and experiment more with what information fans are given.

The aesthetic of the new-for-2018 controversial driver protection device has irritated some fans, while its prominence in a couple of onboard cameras was only realised at the first race. Baku's opening practice session last Friday featured the first use of a new TV graphic over the top of the Halo to display live speed, gear and engine rev information, as well as throttle and brake usage.

F1 has access to much more of teams' data though, from common elements like G-forces, GPS and live sector times to much more sensitive information and measurements. 'We have a number of data sets and we're going to try and add as much as we can that is available,' Dean Locke, F1's director of broadcast and media, told Motorsport.com.

'Teams aren't going to give you anything that gives another team a competitive edge, but we can work with them. We still have things that we've already rolled out, like G-force and other elements, that we can build into that graphic. There will be new elements that we bring forward. We have such a short winter period to get all this finished, so what we are excited about is we can put more in. We can get that data, and various elements, to the viewing public and excite them a little bit.'

Small modifications will be made to the Halo graphic after its first live use, such as thickening the edge of the RPM counter to make it clearer to see. However, individual team graphics are unlikely despite a couple of Halo's featuring text that clashes with the data that gets displayed.

Locke added that F1 'took influences from film, from gaming' for the design, the introduction of which was delayed because some teams evolved the aerodynamic fairings on their Halo. 'That's part of where we're going now,' he said. 'We're listening to these great marketing and research departments now that can reach out, which we didn't utilise before.'

F1 was already considering using the Halo's space to accommodate a graphic before the extent of its onboard camera intrusion became clear in Australia. 'We didn't want to put something out until it ticked all the boxes really, and obviously the big box was to do something different,' Justin Laurie, F1 technical producer, told Motorsport.com. 'It's a starting point to try new things, to take a space on the screen that could be used. It's not doing anything, there's no information or action in that area, so we wanted to utilise that space in an innovative and creative way. It seems to have created a popular response, which is a really good thing.'