It's still 18 months away from production, but VW is hard at work on the next Golf.

The next-generation of Volkswagen Golf has been spotted testing – but don't get too excited, because the test mule our photographers have spotted uses a current Golf's body with some of the new car's engineering being taken out on test. This is the first stage of testing for a new car – it's not due to go into production until the middle of next year, so VW will still be working out some of the essentials.

There are still a few things to look at though – the test drivers have left the bonnet open for us to have a little nose around at, and the cabin is visible too. The engine bay looks quite messy with an array of wires and suchlike on display. The interior of the new Golf is likewise still a workmanlike environment, but give us a hint of the touchscreen excitement to come. 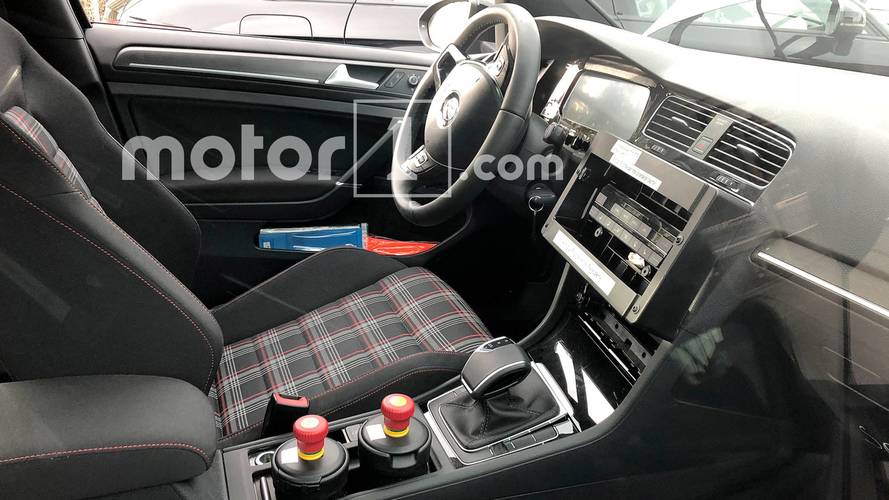 Underneath the skin, the new Golf is set to ride on a modified version of the company's successful MQB platform. An increased use of lightweight materials should help the hatchback shed around 50kg. VW also intends to offer a variety of engines with a 48V mild-hybrid system for improving fuel economy. The company's increased use of cylinder shut-off and engine-off coasting would also improve efficiency. It's probably a case of looking at the shots too long, but to our tired eyes the test car even looks a little underwhelmed around the wheel arches, suggesting the new car could be a touch narrower.

The development team still appears to have a lot of work to do on the interior. A digital screen sits in the instrument panel – might we see an improved version of the digital displays that the Volkswagen Group companies have pioneered? A blank panel on the centre section of the dash suggests there could be a display for infotainment and heating controls there, too. This one features an automatic gearbox, but a manual will still be available.

VW is investing £2.6 billion into its Wolfsburg factory in Germany to set it up for producing the next-generation Golf in the one location. Volkswagen will start to build the eighth-generation Golf in June 2019, and the important new car will go on sale in the fourth quarter of the year.