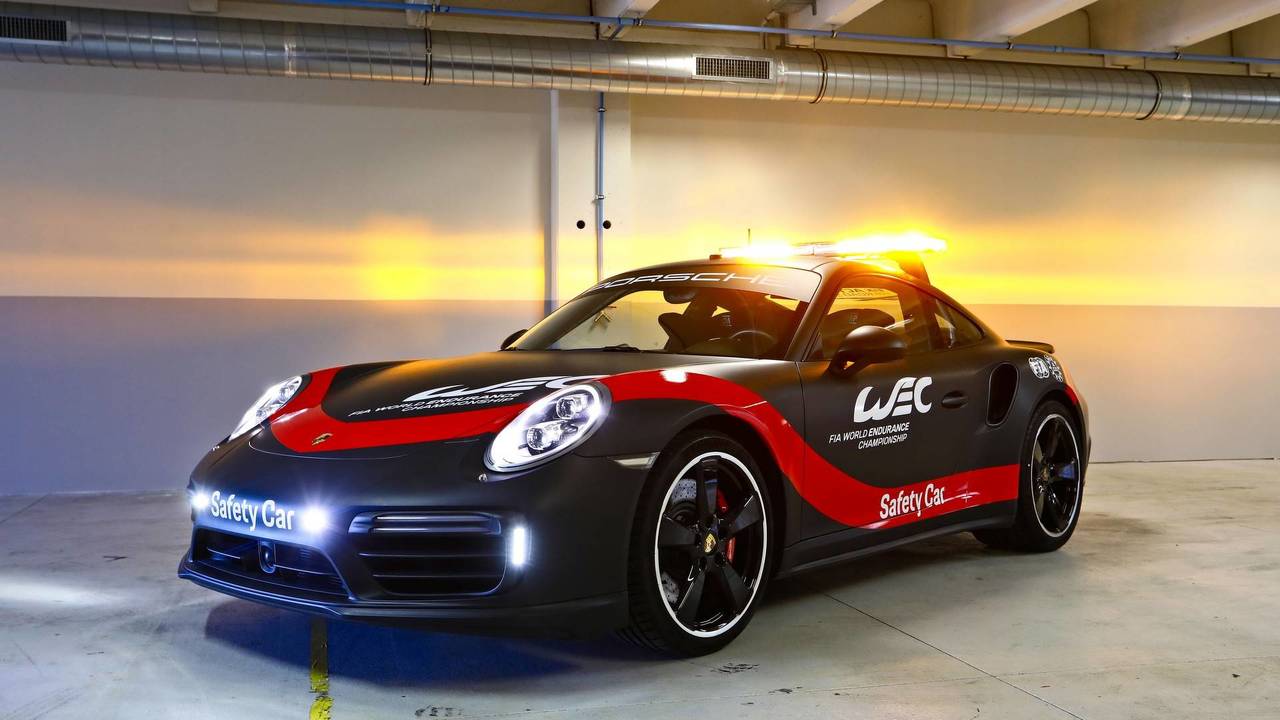 Based on the Turbo version with the Sport Chrono package, plus some modifications inside and out.

Just a few weeks after Mercedes unveiled the GT R as the new and most powerful F1 Safety Car ever, the carmaker's neighbours in Stuttgart are introducing the equivalent car for the World Endurance Championship.

Porsche has selected the 911 Turbo to serve as the official Safety Car until 2020 and that means we’ll get to see it during the famous Le Mans endurance race for the next three years.

Largely based on the standard model, the 911 Turbo has gone through a few minor changes to comply with the requirements for a Safety Car. It now has a light bar mounted on the roof, flashing lights at the front and rear and radio equipment inside the cabin where there are full racing seats with six-point harnesses and a monitor displaying track signals.

The engineers have also fiddled with the brake and suspension by optimising them for track use, while the car’s livery features a predominant matte black look contrasting with the glossy red stripes to mirror Porsche’s factory racing cars.

Porsche is supplying more than just one car for WEC – there are actually 11 intervention vehicles involved in total. Two 911 Turbos will travel across the world to every round of the endurance championship and will serve as safety cars and will be joined at the Le Mans race in France by three permanent vehicles, also 911 Turbos.

A variety of other Porsche models will be at the circuits throughout the racing season for the safety personnel as well as for the medics.

Riding on stock 20-inch wheels with Michelin Pilot Sport Cup 2 tires, the 911 Turbo WEC Safety Car carries over the twin-turbo flat-six 3.8-litre engine (with the Sport Chrono package) rated at 533bhp and 524lb ft of torque. It’s enough muscle for a run to 62mph in three seconds and then on to a top speed of 199mph.

The 2018/19 WEC double season will kick off with the Spa-Francorchamps event in Belgium on 5 May. The highlight of the season, the 24 Hours of Le Mans, is scheduled to take place at Circuit de la Sarthe on 16-17 June.

The WEC is set to move to a Formula E-style multi-year format from 2019, starting in the autumn and ending with the Le Mans race in the summer of the following year. As the championship makes the transition it means an epic superseason this year, which will encompass both the 2018 and 2019 Le Mans races.

Stuttgart. From now until 2020, the Porsche 911 Turbo will be the safety car for the Sports Car World Endurance Championship (WEC). The all-wheel-drive 911 produces 540 hp (397 kW) and sprints from zero to 100 km/h in 3.0 seconds. Technologically, the safety car corresponds largely to the production vehicle. Only a few race-specific modifications were added, such as the light bar on the roof and a radio for contacting the race director, with the brakes and suspension optimised for the racetrack. The matte-black design with glossy red stripes is modelled on the Porsche emblem design of the factory race cars.

Porsche not only supplies the safety car for the FIA WEC, including the 24 Hours of Le Mans, until 2020, but also provides eleven intervention vehicles. Two Porsche 911 Turbo will travel as safety cars to all WEC rounds worldwide. Three 911 Turbo head to Le Mans as permanent vehicles. Furthermore, various Porsche models are provided for motor racing medics and track safety personnel.

The race director deploys the safety car whenever the field needs to bunch up in the event of dangerous situations. The 911 Turbo production vehicle possesses the ideal prerequisites for this task: The 3.8-litre six-cylinder engine catapults the Turbo to a top speed of 320 km/h, with the ex-works Sport Chrono Package ensuring the best possible intermediate acceleration.

The 911 Turbo generation’s close affiliation to motor racing is also highlighted by the way the seven-speed PDK dual-clutch transmission is operated: In manual mode, the shift lever is actuated like in a race car. Paddle shifts mounted on the steering wheel are another standard feature. For its racetrack job as support to the World Endurance Championship, the vehicle is fitted with Michelin Pilot Sport Cup 2 tyres on standard 20-inch rims. Full-shell racing seats with six-point harnesses for the driver and front passenger, a monitor to display track signals, a radio to contact the race director, a signal light system on the roof as well as flashing LED lights at the front and rear have been added to the intervention car for its racetrack duties.

“We’re delighted to have the chance to supply the safety cars and intervention vehicles for the Sports Car World Endurance Championship until 2020. As a sports car manufacturer, it was rather easy for us to find a suitable car. Basically, many of our production models fit the bill for this special task on the race circuit. Ultimately, however, we chose the Porsche 911 as the safety car. In total, 16 vehicles from different model lines will fulfil different functions in the WEC,” explains Alexander Stehlig, who is responsible for the safety car project on behalf of Porsche AG as the GT Motorsport programme manager.