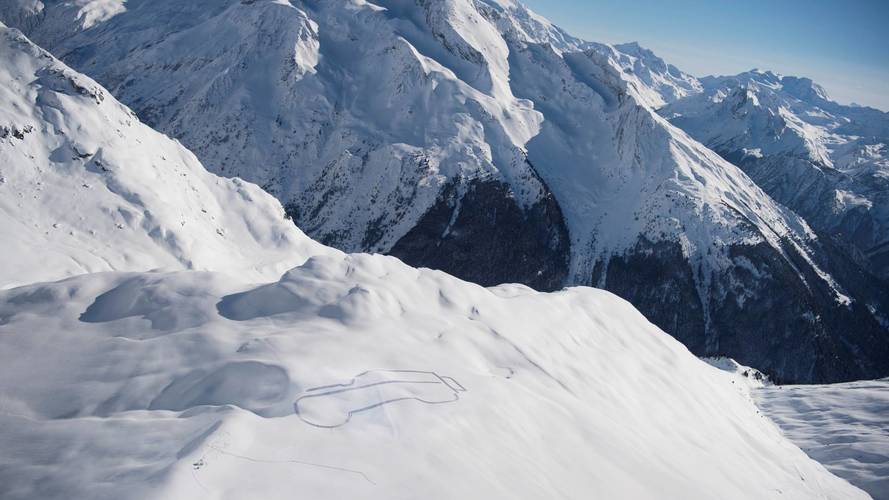 The Defender has certainly left its mark.

Land Rover has kicked off its 70th anniversary celebrations by taking its iconic Defender to the French Alps. But it didn't just take the Defender there, the old workhorse left its mark, literally.

A 250m Land Rover Defender outline was etched into the snow to announce World Land Rover Day on 30 April, which marks exactly 70 years since the original Land Rover was first unveiled at the 1948 Amsterdam motor show.

The modern-day Defender – now discontinued, but set to be replaced soon – is a direct descendant of the car that Maurice Wilks, a former engineering director of Rover, drew in the sand at Red Wharf Bay, and then developed into the car then known as the Land Rover. Of course, Land Rover has since grown into a company in its own right and the original has adopted the Defender nameplate to single it out in the brand's ever-diversifying product protfolio.

'Land Rover is an iconic brand around the world and the outline of the Defender is instantly recognisable,' said Jaguar Land Rover CEO Ralf Speth. 'To reach the landmark of 70 years is truly special and we will mark it with a year of celebrations that represents Land Rover's "Above and Beyond" spirit and honours the people behind the world’s favourite SUVs.'

The artwork was created by snow artist Simon Beck, who specialises in creating geometric outlines on foot. He drove a Defender to a high altitude before walking 10.2 miles, or 20,894 steps, to create the outline, braving sub-zero temperatures to start the celebrations by creating the Defender 2,700m up at La Plagne in the French Alps.

'Making my snow art requires endurance, accuracy and strength – all attributes shared with the Defender,' Beck said. 'Its iconic shape is so simple and recognised across the world. This must be the most recognisable piece of art I’ve ever made.'

Land Rover will be broadcasting a series of videos online on World Land Rover Day, showing how the original car was created and who was involved.