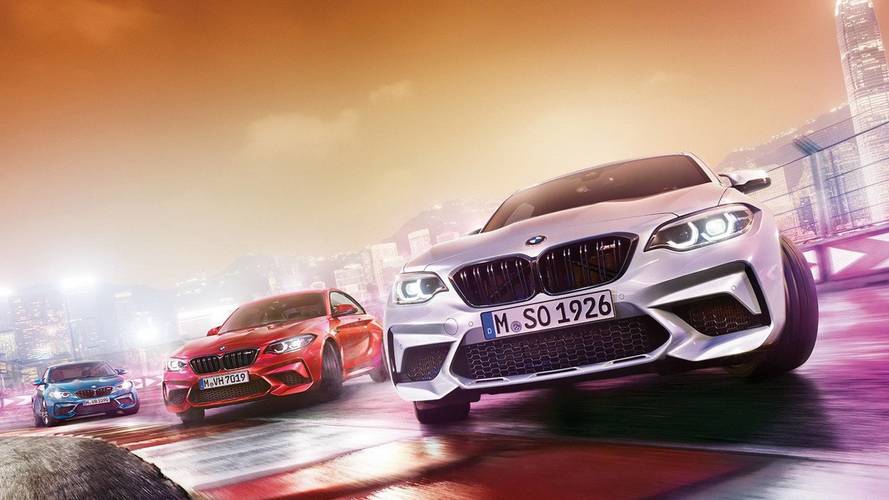 Harder core M2 is about to get the M4 engine.

We know the BMW M2 Competition has been coming, but thanks to fellow automotive brethren, BMW Blog, we can now show you official pictures of the latest car to wear the famous red, blue and purple tricolore.

The literature, leaked from an official BMW Australia marketing pack, confirms that the BMW M2 Competition will use the S55 twin-turbocharged straight six engine as featured in the BMW M3 and M4, although here it will be detuned from 425bhp to 405bhp. That’s a punchy 40bhp more than the 365bhp developed by the standard (these things are relative) M2, that uses BMW’s N55 motor: a 3-litre straight six with a single, twin-scroll turbocharger.

The BMW M2 is already considered by many to be one of the finest and best value M cars in a generation, with high spec suspension, brakes and a variable locking rear differential all shared with the bigger, pricier M3 / M4. The M2 was revised in 2018 to incorporate revised LED light graphics, a redesigned instrument cluster and the latest version of BMW’s iDrive infotainment system, complete with a touchscreen.

The M2 Competition, however, now looks set to become a performance legend; not just because of the shoehorned engine, but because of further M Division accoutrements. A new BMW kidney grille, font valances, sculpted M Sport front seats, M4 wing mirrors and configurable driver settings identified by the steering wheel-mounted ‘M1’ and ‘M2’ buttons are all visible.

BMW has also quoted a 0-62mph sprint time of 4.2 seconds and revealed a picture of a car fitted with its seven-speed DCT dual-clutch automatic gearbox. That may only be 0.1 seconds faster than the current DCT-equipped M2, but we expect the dynamic differences to be far more defined in the real world.

Motor1.com has been reporting on the development of the BMW M2 Competition for many months, but we’re now just weeks away from the car’s official and unveiling all the glorious details. Keep it locked for more info very soon.