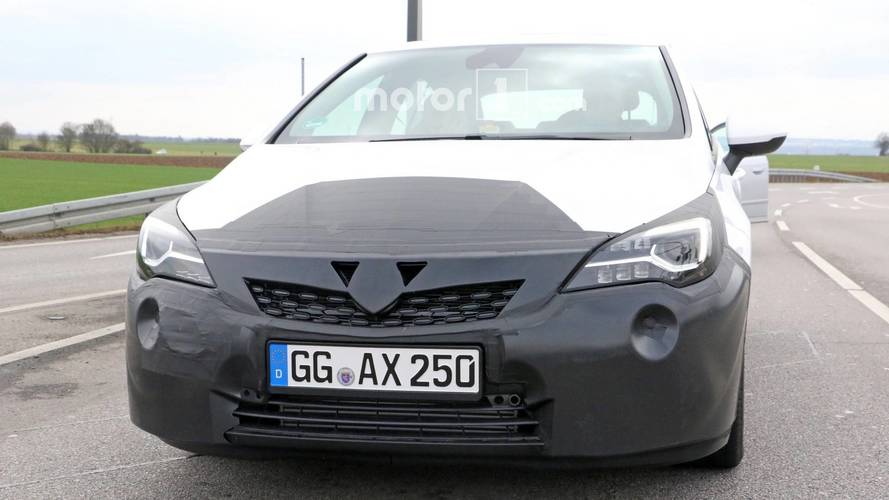 Could there be a new PSA-sourced engine under the hood?

The Vauxhall Astra is one of the most popular cars in the family hatchback segment, where the Volkswagen Golf continues to reign supreme but faces stiff competition from the new Ford Focus, which is set to be revealed next week. Coming in a distant third, the Astra has often struggled to register an impact, which could explain why Vauxhall is readying a facelift of the stylish car.

Our spy photographers have spotted a test prototype of the upcoming Astra, complete with a fake plastic panel to hide its updated front end. Obviously, this is where most of the visual changes will be focused, and we expect to see a more pronounced radiator grille and possibly a new shape for the bumper. Interestingly, nothing is hidden at the back, but this is likely an early stage prototype test vehicle and a lot could change in the coming months.

Given Vauxhall's French ownership, we won’t be too surprised if bigger changes are planned for the engine compartment. Simply put, a couple of PSA-sourced turbocharged petrol and diesel engines could be introduced with the facelift, but, of course, we can’t confirm that at the moment. After all, PSA might decide to wait until the next-generation Astra arrives to install its own engines and replace the GM units.

Opel is also expected to bring a sportier version of the Astra with a number of mechanical upgrades. Naturally, a more powerful engine is expected to find a place under the bonnet and reports suggest there are two options – a 1.6-litre turbo petrol engine producing roughly 230bhp or a 2-litre twin-turbo diesel with 210bhp. Both seem to be quite suitable for the sporty hatch, but we would bet our money on the 1.6 turbo.