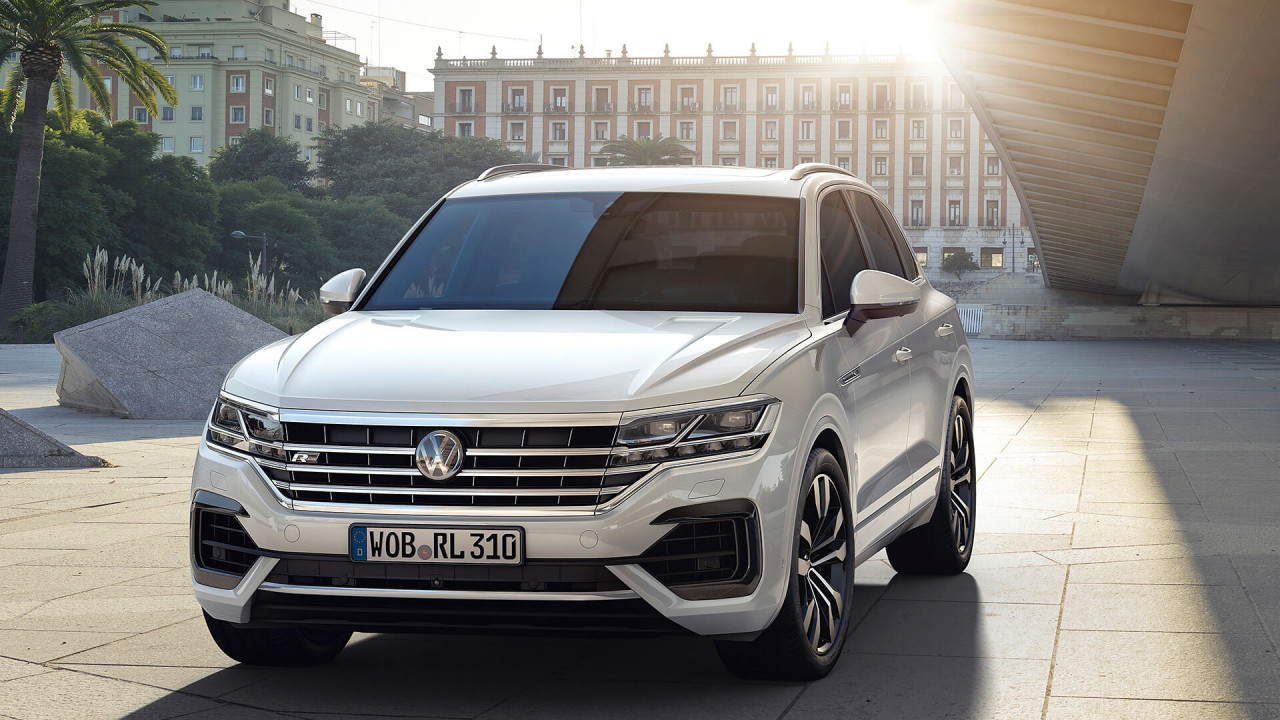 Here's all the information on Volkswagen's new tech-fest flagship.

The new Touareg next to me is still covered with a large cloth. Many already know what it looks like because some rogue photographers took Volkswagen by surprise during the official advertising shoot at the end of last year.

But for the current celebration, of course, it's better to have something to reveal. So when the sheets flutter off the sheet metal, it's a familiar sight. Firstly because we've already seen seen it, but also because it looks exactly like a new Touareg might.

Before we look at the fancy tech – and the Touareg is laden – let's take a walk around the basics. The front end will no doubt polarise opinion, it has more chrome than a 1950s Cadillac, and Volkswagen's designers have worked hard to try and disguise the car's 4.9m length. The wheelbase has grown 77mm to 4.88m, the width has grown 44mm to 1.98m and the roof is a smidge lower by 7mm. VW says it could have gone bigger, but it deliberately restrained itself.

'We don't have to be the greatest. Customers already like this and we are on a par with the Cayenne in terms of wheelbase,' says Touareg manager Stefan Giess. 'Besides, we didn't need to put in a third row of seats, the Touareg intentionally remains a five seater.'

A five-seater with a monstrous boot, mind – thanks to the Volkswagen Group's MLB platform, engineers found a further 113 litres of space. That's down to the less bulky rear axle, which has been reworked. That makes 810 litres available in the back with the seats up, although before they're moved up to 160mm backwards and tilted up to 21 degrees.

Space in the rear was no problem before, but now there's a little bit more. Another advantage of the Volkswagen Group structure: the Touareg body can now be made entirely of high-strength steels and aluminium (48 percent). That alone saves 106kg. Depending on the equipment levels, it could be up to 130kg in total.

It weighs two tonnes, but Volkswagen doesn't want it to feel like that when you're driving it. Gies calls the progress in driving dynamics his 'personal highlight'.

Just like its more expensive siblings, the Q7, Cayenne and others, the new Touareg now finds itself with a fancy high-tech chassis that's shared across the company. The electromechanical active roll stabilisation system and the associated 48V electric system are just as much a part of this as the rear-wheel steering or revised air suspension.

With its electrically controllable stabilizers, the air suspension already works wonders for the other XXL SUVs in the Volkswagen Group range. Watch the Audi Q7 or Bentley Bentayga – both weighing almost 2.4 tonnes – banging through a bend without any noticeable inclination to roll is fairly remarkable. Thanks to the rear-wheel steering, the Touareg's turning circle shrinks to an impressive 11.2m.

Offroading less of a priority

New Touareg customers will be able to look forward to a new level of dynamism, but that'll cost you. However, despite all the desire for going well through a corner, comfort is also decisive, says Gies. The transformation from a dirty smeared off-roader to a classy and elegant cruiser continues.

There's no hardcore off-road package available with locking diffs and suchlike anymore – hardly anyone ordered it. The electronic off-road aids will have to be sufficient, then. The air suspension can lift the car by 70mm, helping the Touareg reach a useful 220mm of ground clearance and a wading depth of 500mm. Ramp and slope angles are 18.5 and 25 degrees respectively.

There are definitely engines in the third-generation Touareg, but this is a delicate topic at Volkswagen these days.

There will be two 3-litre V6 diesels available from launch, with 228bhp/369lb ft and 282bhp/443lb ft respectively. Both are Euro 6d-temp. On the petrol side, a 3-litre V6 is also on the way, with 335bhp and 332lb ft torque. Later on the range gets the 4-litre V8 diesel that we already know from the Audi SQ7 and Bentley Bentayga – 415bhp and 664lb ft will make for a perky drive. All Touaregs are equipped with a permanent four-wheel drive and an eight-speed automatic as standard.

A four-cylinder plug-in hybrid with 362bhp is initially only going to be offered in China – it still hasn't been decided whether that powertrain will make its way to Europe.

As standard you still get analogue instruments and VW's well-worn 9.2-inch navigation system, but you won't want those once you've seen the new 'Innovation Cockpit' Imax screen installed in the Touareg.

VW has combined its twelve-inch digital instrument panel with a new 15-inch infotainment system into a single giant screen for the first time. You won't find anything bigger anywhere else, says the company. Of course, Tesla's large-screen TV is a little bigger, but it is not as well integrated. HMI designer Mathias Kuhn and his team worked on the monster for almost three years.

When we ask him whether the system will eventually be seen in a Passat or Golf, he smiles: 'Not in this form, that would be rather difficult.' A pity, because after a few minutes of playing with Wolfsburg's new super-display it's super-impressive.

The stuff around the huge display screens is also quite nice. There is still a small respect gap between the VW materials and those found in the Audi Q7, but with all the leather, aluminium, open-pored wood and ambient lighting with 30 colours, the new Touareg looks rather fine. In addition, you can spec the Touareg with a 1.27m panoramic glass roof, fancy massage seats and a head-up display.

This brings us seamlessly to the assistance systems, where the large SUV is now right up to date. Put crudely, the car basically drives up to 37mph by itself. Active speed control, lane guidance, lane change assist, junction assist (now also lateral), parking assistant, trailer assist - everything is possible.

All functions, including driving dynamics, are managed by a clever new central control unit. Just how clever this thing is can be seen in the networking of the new night vision assistant with the new camera-controlled LED matrix headlights. If 'Night Vision' detects people in a potential danger area, the LED lights flash at them briefly and mark them so that you can see them better on the instrument display.

Available in Germany from June 2018

You will already have noticed that VW has put a lot of effort into this third Touareg, stuffing it with technology that pushes the car ahead of rivals. Volkswagen is hoping to add to the one million tally of Touareg sold so far – the market launch is scheduled for the end of June 2018 and prices have not yet been fixed. The current Touareg range starts at £45,530 for the 3-litre V6 TDI in SE trim, so we can expect it be somewhere in that region.

Gallery: Everything you need to know about the new VW Touareg