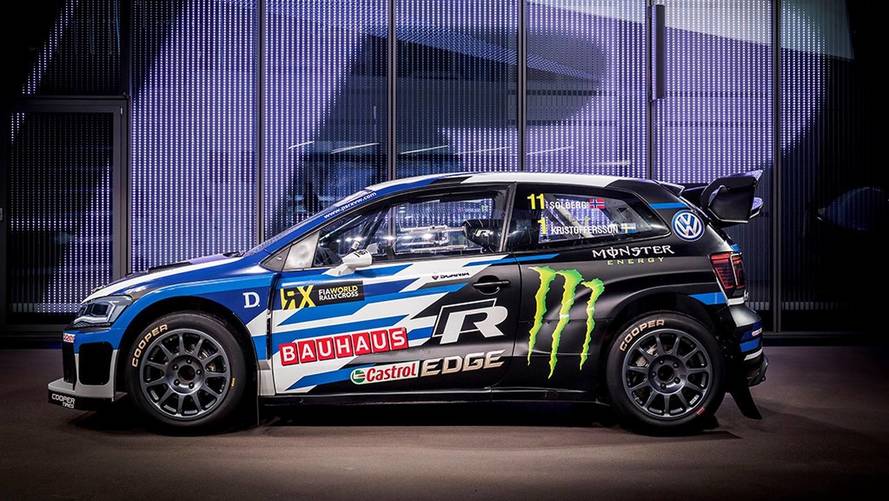 This is the car that Volkswagen hopes will continue its rallycross dominance.

Volkswagen Motorsport and PSRX Volkswagen Sweden have unveiled the new Polo R supercar which the German manufacturer will officially use to defend its World Rallycross Championship title this season.

'There is no question about it, the new season promises to be very exciting. The opposition will do everything in their power to take our title,' said Smeets. 'Our goal is obviously to provide Johan and Petter with a good car, which will allow them to challenge for the world title. I am confident that we will achieve this, and that the new partnership with Volkswagen R will give us even more power.'

The car is a development from last year's Polo GTI – which itself was based on the company's 2016 WRC car – and has been described as 'similar' to the title-winning 2017 car. It features a reworked front with a new bumper and wings, to aid with engine cooling as well as aerodynamics, as well as a rear wing reminiscent of Volkswagen's abandoned 2017 WRC car.

The wing isn't the only rally car carry-over on the Polo R supercar – the six-speed sequential gearbox can trace its roots back to Volkswagen's rally cars, as can the damper setup, while the 2-litre, four-cylinder engine was originally developed for Volkswagen's Beetle rallycross supercar which has been competing in the US-based Global Rallycross Championship since 2014, winning three straight drivers' and manufacturers' titles, and will be racing in the new ARX series this year.

Power is a crazy 570bhp which, along with permanent four-wheel drive, helps the car launch from 0-60 in just 1.9 seconds. Top speed is 'only' around 130mph, but considering the short nature of rallycross tracks, and the outrageous acceleration figure, it doesn't need to be any higher. It could be though, easily, with a bit of a setup change.

PSRX Volkswagen Sweden dominated world rallycross last year, with Solberg and Kristoffersson combining for eight wins out of a possible 12. Kristoffersson claimed the title with seven of those, including an unprecedented five in a row in the middle of the season. Both numbers were WRX records, and the Swede is relishing the increased pressure that will come with being the defending champion this year.

'The initial tests with the new Polo R Supercar have been very good. The development department of Volkswagen Motorsport has done a magnificent job,' said Kristoffersson. 'As world champion, I am obviously particularly under pressure – but I don't mind that. On the contrary, I am looking forward to some spectacular and hopefully exciting battles with the opposition.'

The other four events of the 2017 season went to Mattias Ekstrom and his Audi-backed EKS team, making it a clean sweep for the Volkswagen Group. EKS and Audi Sport have also built a new car for the 2018 season – it is the first S1 that the 2016 champions have built with increased support from Audi, and features a number of aerodynamic enhancements at the rear, as well as new roof-mounted cooling inlets as opposed to the more traditional side intakes.

The 2017 World Rallycross Championship season kicks off 14-15 April in Barcelona. A group test for the championship will take place at Silverstone's new rallycross track next week.