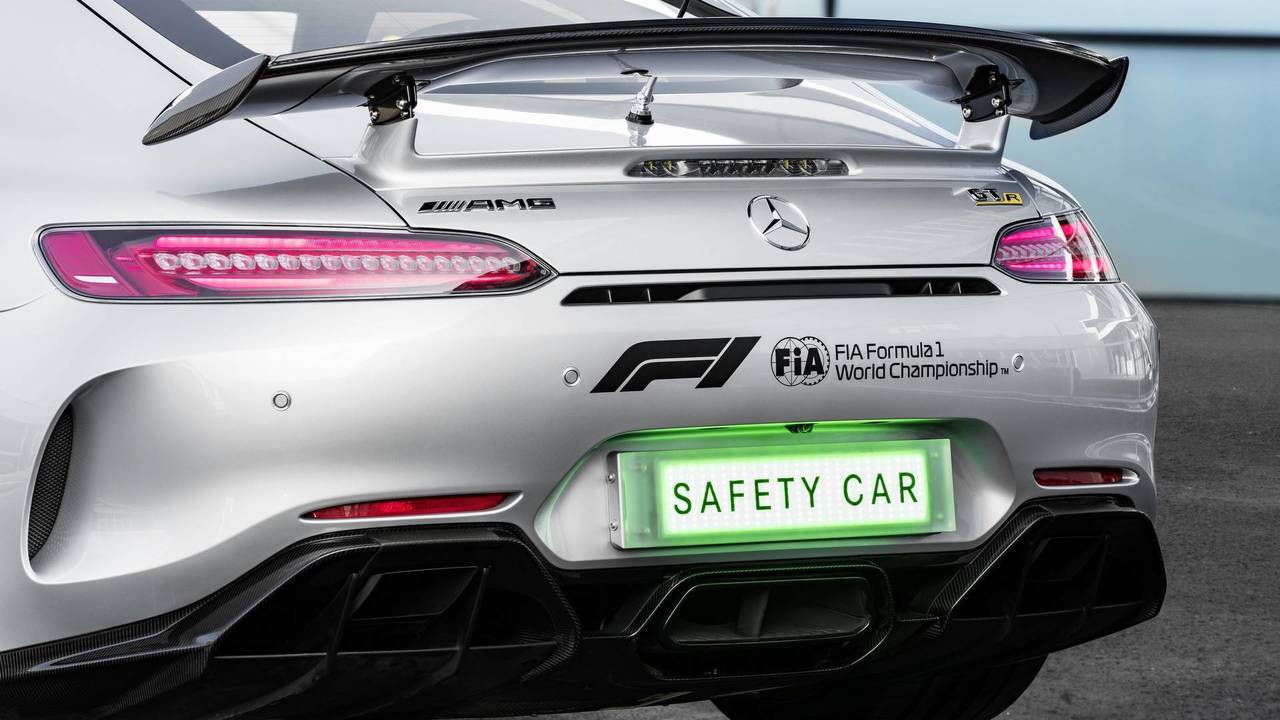 It's the most powerful Safety Car that's been seen in F1 yet.

The latest version of F1’s Safety Car is set to be revealed at the Australian Grand Prix next weekend – Mercedes-AMG is bringing its new GT R complete with new F1 logo stickers and flashing lights to head the field should someone drop it into the wall and cause a mess.
Mercedes says that the new Safety Car is the most powerful one that’s ever been used in F1 – it produces 577bhp and has a top speed of 197mph.

Still, compared with the current generation of F1 racers and with rumours that Mercedes has almost cracked 1,000bhp with its latest racing engine, driver Bernd Mayländer will still have to give it full beans even to keep the F1 field circulating slowly.

‘I am very much looking forward to my new company car,’ said Mayländer. ‘It is an absolute highlight in terms of driving dynamics and is one level higher up still than the AMG GT S of recent years. Of course, ideally the safety car should be deployed as rarely as possible – but when we have to safely bunch up the F1 field and lead it around the track, we will be superbly equipped with the AMG GT R.’

Mercedes is proud of the fact that the new Safety Car is largely standard – the AMG GT R features a 4-litre twin-turbo engine, active aerodynamics and double diffuser and rear-wheel steering. The car is also fitted with an optional AMG Track Pack, which throws in a rollover protection system and high-performance ceramic brakes.

Visually, the car is differentiated from the production version by extensive F1-themed stickers and a light bar that’s been built on top of a carbonfibre roof scoop designed to offer minimal resistance and funnel air through to the rear wing. Inside the car, co-driver Richard Darker has a radio to maintain contact with race control and two iPads that show the television feed and a variety of customisable information displays.

‘When a Safety Car intervention is required during a grand prix it’s vitally important that we have full confidence in the car’s ability to lead the Formula 1 cars around the track safely,’ said F1 race director Charlie Whiting. ‘That means we need a car which is not only capable of dealing with the extreme demands a circuit puts on a vehicle travelling at high speed, but also one which is capable of setting a pace that allows the F1 drivers to keep tyres and brakes working at the right kind of temperature so that they do not struggle while waiting for racing to resume.’

Alongside the safety car, the Mercedes-AMG C 63 S Estate is on hand to provide emergency care as the Official FIA F1 Medical Car, driven by Alan van der Merwe with the FIA’s deputy medical delegate Dr Ian Roberts in the passenger seat. The luggage compartment is loaded with emergency equipment, including a defibrillator and respirator.