New tech will appear, but product boss says it won't be a central feature.

Porsche has revealed the first details of the next-generation 911, which the Stuttgart-based company describes as a ‘bastion of stability’ that will ‘evolve’, rather than change dramatically.

The ‘992’ version of the iconic sports car is set to be unveiled later this year, but Porsche has published images of the newcomer early – albeit with a dazzle camouflage colour scheme.

Despite the optical illusions of the paint job, the usual 911 hallmarks are clearly visible, such as the round headlights and the curvaceous rear end. However, while the exterior will evidently remain familiar, Porsche has hinted that new technology may arrive under the skin. 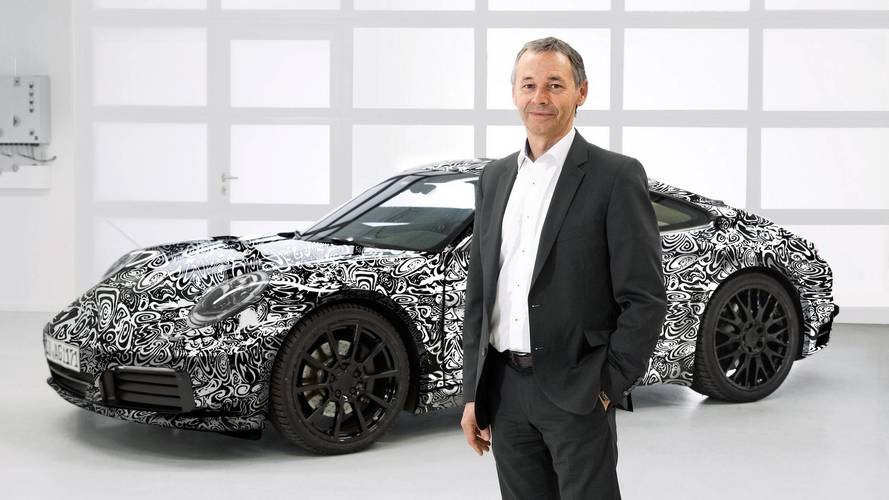 Porsche’s product director, August Achleitner (pictured), admits that ‘industry megatrends’ such as digitalisation, electrification and connectivity will play a role, but that each new technology has to suit the 911 before it is added to the mix.

‘With each innovation, the decisive factor for me is whether it suits the character of the 911,’ explains Achleitner. ‘Even when it comes to the individual assistance systems, they have to fit with the 911.’

The 992 model is expected to boast technology such as lane-keeping assistance and adaptive cruise control, but Achleitner claims that says customers will always be able to switch them off if they so wish.

‘Those [technologies] are convenient and useful things, but the customer has to make the choice to use them and, above all, be able to switch them off when they’re not desired,’ he said.

Achleitner is also keen to dismiss any speculation that the newcomer will be an electric car – indeed, he has confirmed that the current configuration of a rear-mounted turbocharged flat-six will remain – but he admits that some form of electrification could be an option further down the line provided ‘it fits Porsche and the specific character of the 911’.

‘Two years ago, I’d have said “no way”,’ said the self-confessed flat-six fan. ‘Today, though, I wouldn’t rule it out. I drove the prototype of our coming electric sports car, the Mission E, and it was a very compelling experience. And the performance of the Porsche LMP race cars with hybrid drive systems is quite simply sensational.’