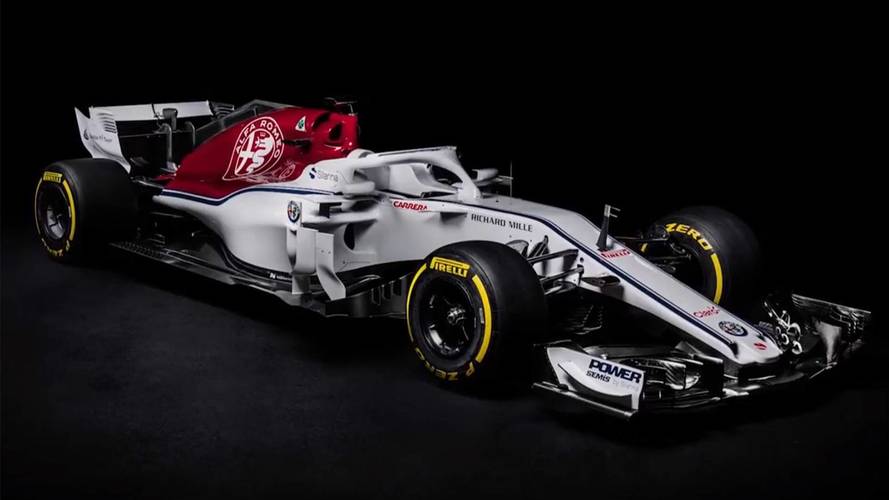 Sauber has added a splash of red to its 2018 F1 car thanks to new Alfa Romeo sponsorship.

The Sauber F1 team has revealed its new 2018 racing car – our first look at the team's new partnership with Italian car maker Alfa Romeo. As part of a closer partnership with Ferrari this season, team boss Fred Vasseur concluded a title sponsorship deal with Alfa for 2018.

The logos of the Italian car manufacturer, a Ferrari sister brand, prominently feature on the engine cover of the C37. The car itself adopts a new aerodynamics philosophy, which technical director Joerg Zander hopes can deliver a step forward in form: 'The 2018 challenger is the result of the hard work that everyone in the factory has put in over the last few months.

'Speaking about the C37, the car philosophy is much different to that of the C36. The aerodynamic concept has changed significantly and the C37 has several new features in comparison to its predecessor. We are positive that the new concept offers us more opportunities and will help us to make improvements during the course of the season.'

The new Sauber is fitted with Ferrari's current power unit, with the team having run a year-old version throughout 2017. Speaking earlier this year, driver Marcus Ericsson reckoned there was no reason why the team could not challenge strongly in the midfield thanks to progress on the engine and aero front. 'We're up against Haas and Toro Rosso,' he said. 'I think next season will be very unpredictable in some races.

'It could go very well and at points we could also challenge Renault and Force India. But there will be other races where there will be problems and we will be further down. The goal is simply to get into the group of teams that are in the midfield – but it is clear that there will be a very open battle grand prix after grand prix.

'I want to be in the best shape possible to find the satisfaction that was missing in 2017.'

The new Sauber features some intricate detailing around the sidepods, as well as a large number of air intakes that sit behind the driver. Sauber has also become the first team to add some aerodynamic detailing to its new Halo safety device, with a small spoiler sitting on the top of the white-painted hoop.