A legendary driver and a legendary car: Walter Röhrl takes us for a spin in the forthcoming Porsche 911 GT3 RS.

It really couldn’t look more incongruous; a Lizard Green, big-winged 911 GT3 RS parked on the snow outside the Porsche Experience Centre, some 110 miles north of the Arctic Circle in Finland. Quite why Porsche has chosen to reveal its most track-focused, rear-wheel-drive car at an event celebrating 30 years of four-wheel-drive 911s is anyone’s guess, but we’re not about to argue, especially as we’ll be getting a ride.

In case you missed the leaked information, this is the new Porsche 911 GT3 RS, or the 991 Gen II GT3 RS if you’re up on your Porsche-speak. A lighter, even more focused version of the already-light, focused GT3. 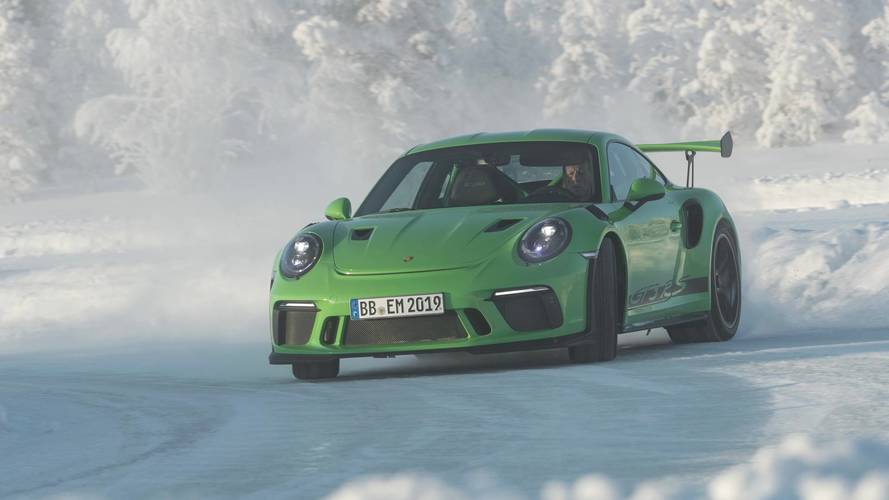 There were rumours that the new RS might see an increase in engine capacity or, more worryingly for its purist audience, add forced induction, but neither have materialised. So the RS uses the GT3’s 4-litre, naturally aspirated flat-six, but thanks to its differing induction system – which utilises the 911 Turbo-derived body’s intakes forward of the front wheels, an RS-specific exhaust and differing electronic control – power has grown from 493hp in the GT3, to 513bhp in the RS.

Not a huge leap, admittedly, but then with the RS it’s never just about power, indeed, as GT Boss Andreas Preuninger says, the RS is 'more about tactility and precision. Precision was what we had in mind'. 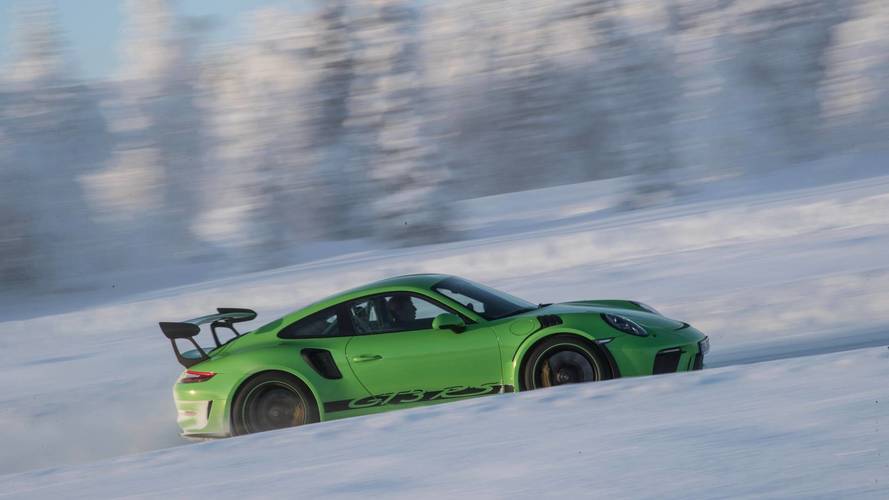 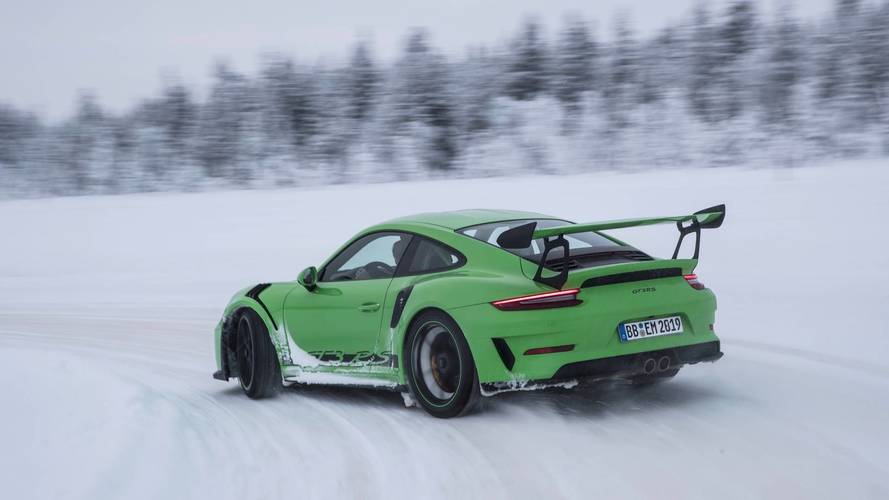 Using that GT3 engine as a base, the maximum revs have increased too, rising by 200rpm up to a 9,000rpm maximum, torque increasing by around 7lb ft, all of which is enough to allow the GT3 RS to record a 0-62mph time of 3.2 seconds and a 193mph top speed.

And the small matter of a Nürburgring lap time? It’s not possible to say with absolute certainty, yet, but Preuninger anticipates a time in the region of 7:05. Of that he attributes only around one second improvement thanks to the power, the largest gains being via the suspension, tyres and aerodynamics.

The chassis is, to all intents and purposes, identical to that of the GT2 RS. That means rose-jointed suspension throughout, the only bushed connection underneath relating to a single mount for the rear-wheel steering system. The spring rates are the same as that of the GT2 RS; firm, for sure, yet the damping is essentially that of a 911 Cup Car set up for the bumps of the Nürburgring. If our experience in the GT2 RS is anything to go by, the GT3 RS will exhibit phenomenal control, mixed with a compliance that’s at odds with its track focus. 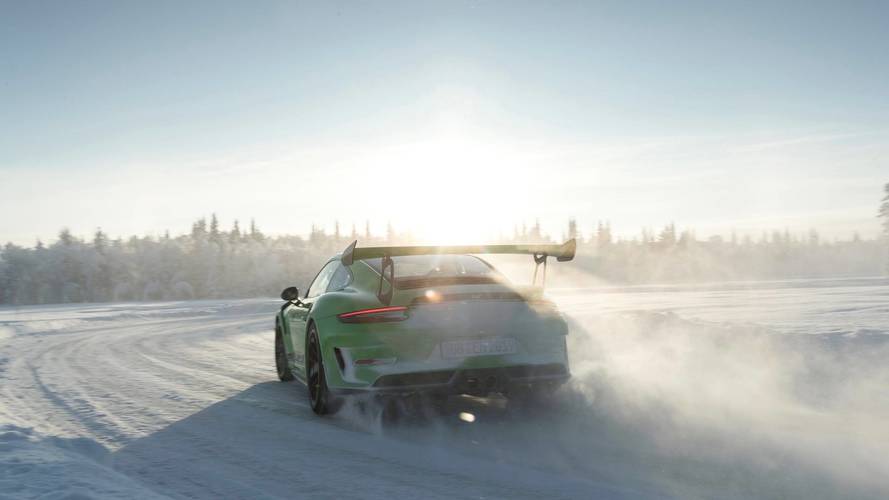 Every element of the GT3 has been finessed to create the GT3 RS. That rear-wheel steering has been recalibrated for greater immediacy and stability, the seven-speed, dual-clutch, 'PDK' paddle-shift transmission is improved (the RS remaining two-pedal only), the e-diff response altered, even the brake pads sit fractionally closer to the brake discs for quicker response.

The front discs are now cooled by the same Naca ducts that debuted on the GT2 RS. Like it, those ducts have the double benefit of not just cooling the brakes and improving the airflow under the car, but also smoothing usually turbulent air over the car to the large rear wing. That wing sits higher in the airflow, allowing it, in conjunction with a new rear diffuser underneath to see the GT3 RS generate levels of downforce equal to its predecessor, all while creating less drag. Those efficiencies define the RS’s make up. 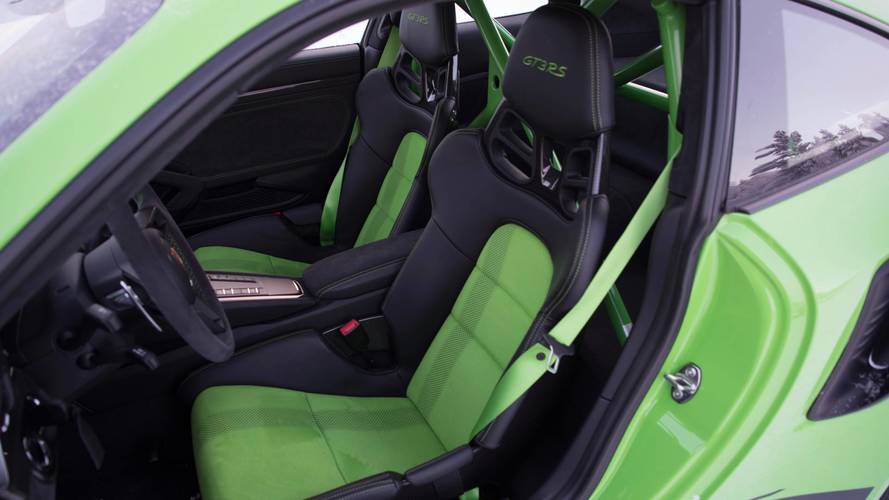 Naturally there are weight savings. Preuninger points to having taken nearly 5kg out of the interior carpets and sound-proofing alone. It is likely, however, that due to a change in the way weights are measured for the legal homologation processes, that the GT3 RS will be quoted with a weight figure the same as its predecessor. If Porsche was to be allowed to quote the new RS in its lightest form, as it has been able to previously – without air conditioning, with lightweight seats, PCCB carbon ceramic brakes, no radio system – it would see a saving over the old car, particularly as there’s now the option of a Weissach Package.

That Weissach Package is a carry over from the GT2 RS (and the 918 Spyder before it). Like the GT2 RS with the GT3 RS it brings a 29kg overall saving, thanks to a carbonfibre roof and bonnet panels, a titanium roll cage and magnesium wheels. There is a proviso for early customers where the Weissach Pack will be offered as a two-stage package, as production delays on those magnesium wheels mean they’ll not be available on the earliest customer orders. Weissach Package equipped cars will be obvious, those panels being in visible carbon, but – unlike the GT2 RS – they won’t feature a body-coloured stripe through them. 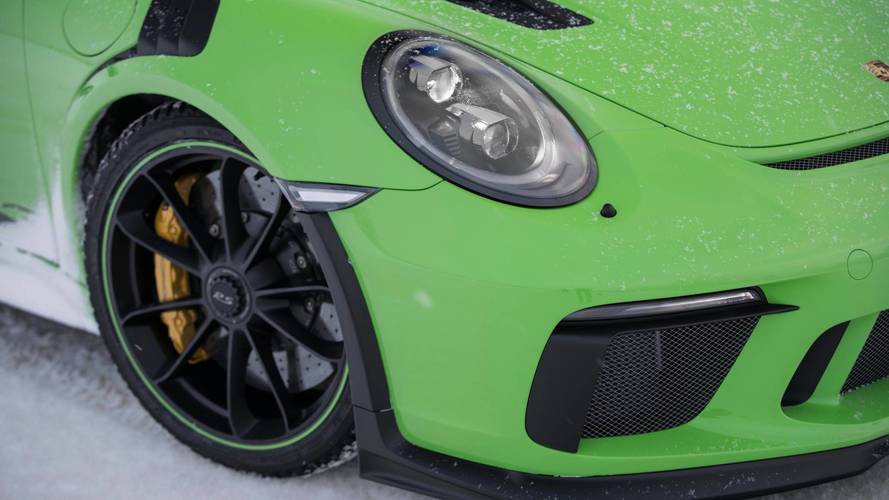 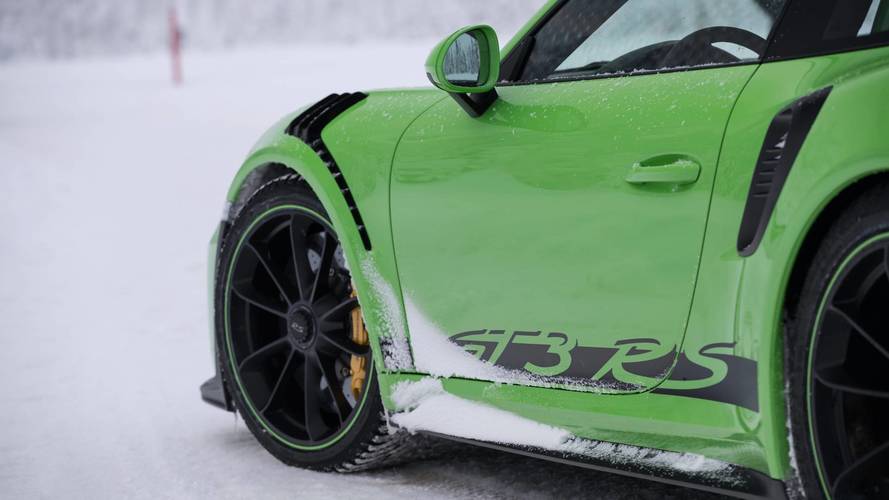 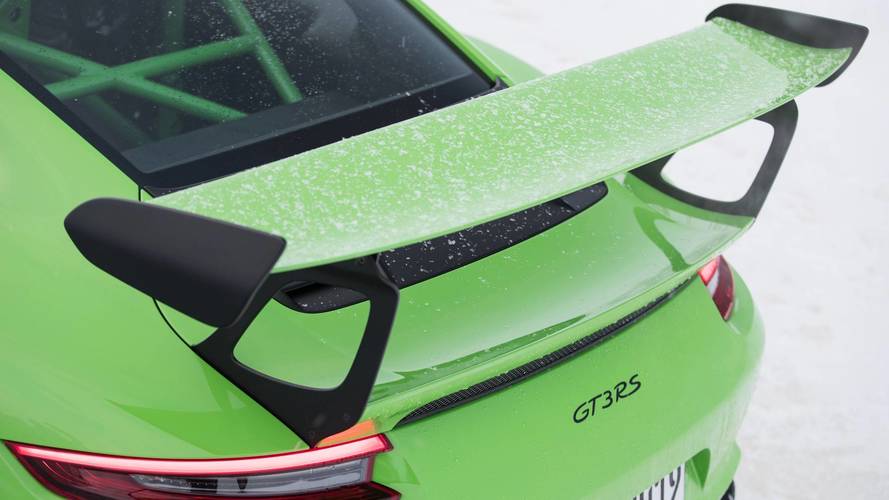 A ride with Walter Röhrl

That carbonfibre isn't apparent on Walter Röhrl’s GT3 RS in Finland, the black wrap feigning ‘disguise’, the door shuts revealing the car underneath to be the same Lizard Green of the car Andreas Preuninger pulled the cover off earlier. Röhrl’s smiling, a man happy in his work, that job today being to taxi some ballast – me – around a tight, fast ice track at this most northerly Porsche Experience Centre.

Röhrl’s cooler than the ambient temperature, about -28C if you’re asking. The way the former multiple world rally champion makes the GT3 RS do what he wants it to do is genuinely humbling to watch. There’s an efficiency of movement, measured responses and inputs that are anticipatory, Röhrl is proactive in his driving rather than reactive. The GT3 RS is sensational with him driving, the cabin filled with the exotic, racer-edged notes from the screaming 4-litre engine, the suspension riding with a serenity over the rutted, bumpy icy track.

A worthwhile insight into the RS? Honestly, not really, even if those few moments in it with Röhrl will remain in sharp focus when all the other details have faded away. 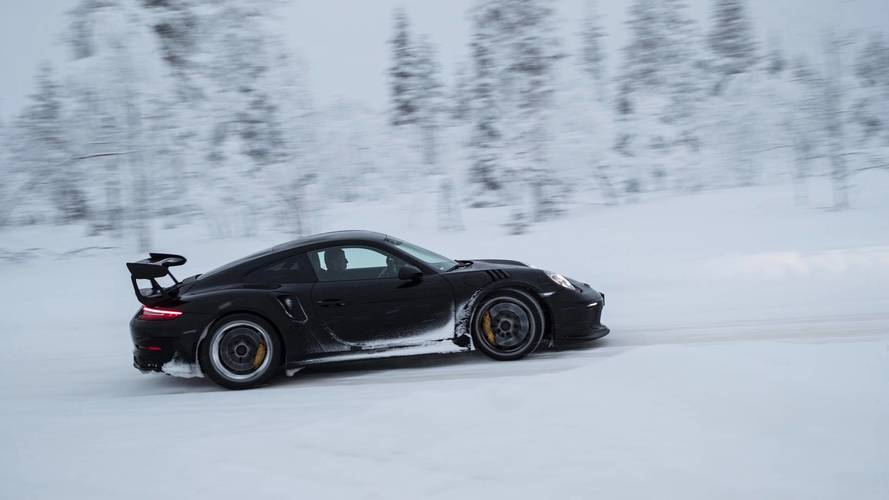 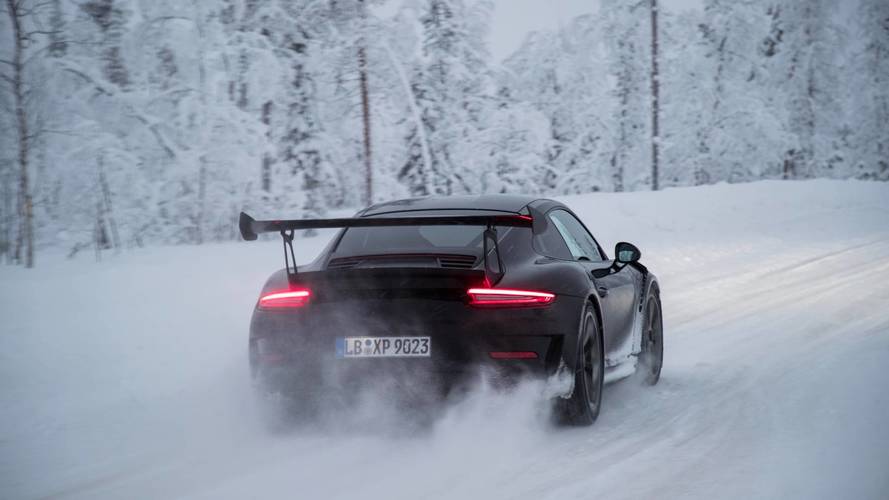 There will be more to come in the next few months, firstly when it’s shown properly at the Geneva motor show in March, then when we drive it sometime after. As a tease though, the RS promises the same package as ever, a combination of incremental changes that add up to a lighter, faster more engaging whole. The same as it always was, only better still.

It's available to order now, with a starting price of £141,346, Such is the clamour for GT department products, if you’ve not already got your order in you’ll be in for a long wait – if, indeed, you’re able to get your hands on one at all.