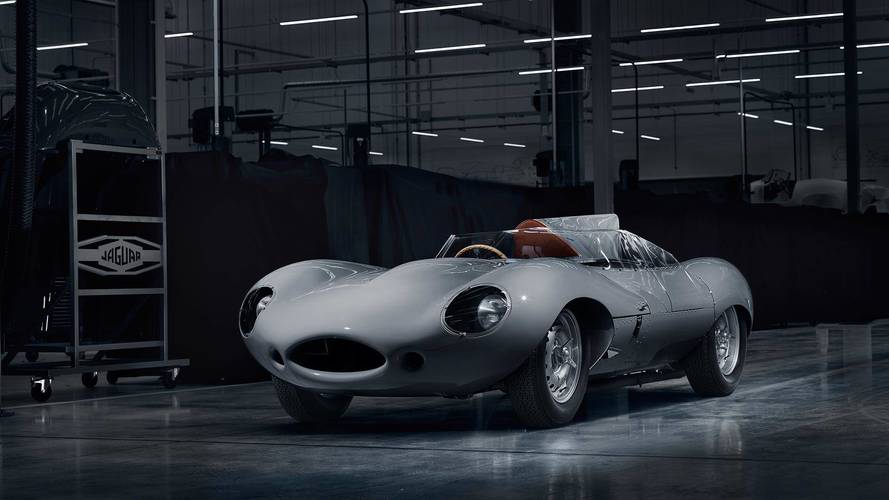 A classic has been brought back to life thanks to the dedication of a few.

Jaguar Classic has done it again. In August 2014 it launched the ‘continuation’ Lightweight E-Type, a series of six cars that used up the leftover chassis numbers from the original 1963 production run. They sold quickly, at over £1m each.

In November 2016 it was the turn of the XKSS, once again using the chassis numbers left unused back in 1957. Nine were built. As of the end of January 2018, six cars were complete, four of them still at the Jaguar Land Rover Classic Works headquarters awaiting collection. Two were about to return from the paintshop, and another was awaiting its turn to be painted.

Meanwhile, at the back of the Classic Works workshop, a closed-off skunkworks area hides the prototype for the latest continuation car project – the D-type, resplendent in Jaguar Birch Grey. The project is headed by Kev Riches, a long-term Jaguar employee and E-type owner who has also overseen the Lightweight E-type and XKSS continuation cars. His team has grown from five to 12 in the past few weeks.

Originally, 100 D-types were planned – at least according to Jaguar legend – but between 1955 and 1956 just 75 were built. You’ll see where this is going… Jaguar Classic will build the remaining 25 D-types as continuation cars. That’s a significant increase in numbers over the Lightweight E-type and XKSS, and shows the increased confidence that the company has in the appeal of these continuation cars. Even before launch, several had been pre-sold.

The continuation D-types will be sold in two distinct styles: 1955 production-spec short-nose and 1956 works-spec long-nose – the original short-nose style having been developed into the long-nose for improved high-speed performance by aerodynamicist Malcolm Sayer.

The first D-types available from Jaguar Classic will be the long-nose cars, and the short-nose will follow next year. The long-nose will have the full fin behind the driver’s head, angled at the correct 1.5 degrees from the car’s front-to-rear line; the fin was added to improve stability on the Mulsanne straight at Le Mans.

Did it work, in those early days of aerodynamic understanding? It certainly made a difference, and the D-types were clocked at over 170mph at Le Mans and a remarkable 185mph at Daytona. Not bad for 60 years ago… And of course, the D-types won at Le Mans three years in a row, 1955, 1956 and 1957.

But back to the present day. The starting point of these continuation cars was the excavation of every available original design plan from Jaguar’s archives, and the 3D scanning of two very important cars.

The first of those two cars was the 1955 production-specification short-nose, chassis number XKSS 728, which started life as D-type XKD 547, shown at the 1956 Barcelona Fair, before being converted into an XKSS. It’s known to be highly original, never having undergone repairs or modifications. Even all its nuts and bolts are thought to be authentic.

The other is the 1956 works-spec long-nose, chassis XKD 605, registration 393 RW, owned by Jaguar all its life. It won the 1956 Reims 12 Hour in the hands of Duncan Hamilton and Ivor Bueb, and was raced at Le Mans the same year by Mike Hawthorn and Bueb but suffered a persistent misfire that was later found to be due to a cracked fuel-injection pipe. All the same, it finished sixth; the race was won by an Ecurie Ecosse D-type.

It was then lent to the American Cunningham/Momo team, painted white and blue, and raced in the 1957 Sebring 12 Hours, again by Hawthorn and Bueb, finishing third. It returned to the UK in 1961, was repainted in British Racing Green, then shipped out to Italy where it spent 20 years in a museum.

Why these two? Because they’re known to be two of the most original D-types in existence. You’ll notice the short-nose is actually an XKSS but, like all XKSSs, it started out as a D-type. It even has the original non-symmetrical intake at the nose of the curvy bonnet.

What? Why non-symmetrical? Was there some aerodynamic trickery going on? No, it’s more likely that the craftsmen involved just weren’t able to get the shape exactly right – it’s a characteristic of every original D-type and XKSS, as is the non-symmetrical bonnet bulge.

In fact, Jaguar Classic 3D-scanned several cars as part of the XKSS project, and found them all to vary not just from car-to-car, but from side-to-side of each car. Hand-built cars are rarely symmetrical or uniformly built...

Which brings us to the first dilemma of any team building a continuation car or recreation. How perfect should it be? ‘We decided it should be warts and all,’ says Kev Riches. ‘It has to be authentic – so many restored cars look too perfect.’

At the time of the XKSS development, Kev and the team looked into the various methods of creating the bodywork, to choose between using pressed tools, modern-day superforming, Kerksite prototyping tools or wooden tools. The danger was always that modern methods would produce a body that looked too perfect – but production quality did need to be lifted in order to avoid typical original D-type and XKSS faults, such as the doors banging into the sills when closed.

The team came to the conclusion that only hand-made panels would do, and they visited several companies to find a suitable supplier. The one they settled on was nearby Envisage, a Coventry company that’s little known to the general public but has huge respect in the industry for its work building prototypes and low-volume production runs.

Envisage employs more than 30 skilled metalworkers, many of them surprisingly young but several who previously worked at Abbey Panels, where Jaguar bodies from XK120 to XJ220 were produced. The D-type bodies will be made using traditional English wheel and metal-beating methods, although where wooden formers would have been used to shape the panels, the formers are now made in ureol, a high-strength polyurethane.

As for the mechanical parts, the D-type and XKSS used a modified version of the 3.4-litre six-cylinder XK engine, with a dry-sump oil system to allow the engine to be set lower in the chassis, and canted over by 8.5 degrees for the same reason.

Even the oil filters needed detective work to conform to the authenticity mantra. They were originally supplied by Tecalemit but have long been obsolete, so most D-types and XKSSs now run on modern filter conversions. Clearly this wouldn’t do, but the Classic team tracked down ‘another Fred in the shed’ (Kev’s description of tiny companies doing unsung but invaluable work) in New Zealand reproducing the original-style of filter, and ‘brought him into the fold’.

The radiator in the prototype isn’t quite how Kev wants it, but the 25 customer cars will be more authentic. When the D-types were new, the radiators were supplied to Jaguar by Marstons; only a few years later, in the 1960s, Northampton Radiators, now NAR Group, starting making accurate replacements, and now the business has passed from father to son, and the company still has the original patterns.

‘We keep finding these little organisations,’ says Kev. ‘They’re one, two, even three generations old, and they’ve been making these parts for decades.’

The transmission is also all made from new, with a race gearbox and clutch that will feel and sound just as an original would have. Suspension, meanwhile, is sourced from Pearsons Engineering, one of several long-established Jaguar specialists that Jaguar Classic works with. The various companies help each other out in a swap of the expertise and financial power required to produce long-lost parts.

With the mechanicals sorted, the team moves onto the trim. Race-car interiors are never what you’d call luxurious, but a D-type’s still looks special, and the continuation car’s is no exception. The team chose to finish it in a tan aniline-type leather, as close as possible to the original specification. It’s stunning.

‘Run your thumb or nail over it, and it marks up,’ points out Kev, which is exactly how they wanted it, so it will quickly lose the too-new appearance.

The instruments are spot-on, too, although the Smiths originals have been unavailable for years. Smiths was bought by Lucas in 1984, which took over the Smiths factory in south Wales but moved production of the instruments to a different site, a few miles away. This factory, and the rights to manufacture Smiths instruments, was later taken over following a management buy-out, with the company renamed Caerbont Automotive Instruments.

Jaguar Classic commissioned Caerbont to recreate D-type instrumentation, with the result that authentic D-type instruments are now available not just for the continuation cars but also for anyone else in need of them. These are the finishing touches to car zero that were being fitted and fettled just days before its official unveiling at the Paris Retromobile show.

So, has it been easier than the XKSS? And will D-types be quicker to build, given that they have less trim? ‘There was a lot of learning from the XKSS,’ replies Kev, ‘and that has given us the ability to build the short-nose in particular. The big challenges have been working out what changes would be needed for the long-nose.

‘They’ll take a similar time to build, though, because every car will be different, just as they were in the day – they were designed around the driver in many cases. The XKSS windscreen surround takes a long time to fit, but the D-types have the fin, which is very labour intensive to get right.

‘It’s been a lot of work but we always get there because of the team we’ve got. And we have fun!’