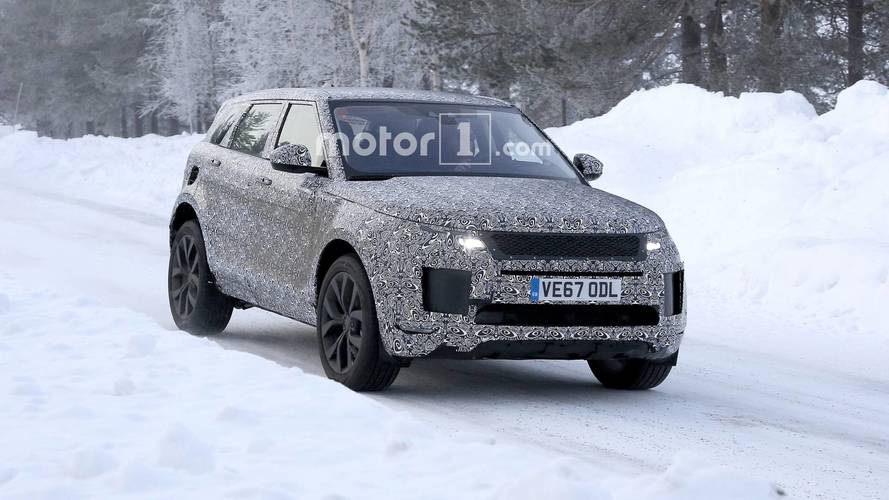 The entry-level Range Rover model will debut later this year.

The current generation Range Rover Evoque continues to be a strong seller for the British car maker, but it’s slowly approaching its well-deserved retirement after around six years on the market. Land Rover is already working on a new model, which is set to retain the small SUV's basic dimensions, but the company aims to make the car better in nearly every possible way.

Seen here in our spy photos is a completely camouflaged Evoque prototype – most likely wearing its production body. All the exterior elements are covered in camouflage stickers, but that’s not enough to hide the obvious resemblance to the Range Rover Velar. The rear end gets noticeably different wraparound lights along the same lines as the sister car.

The entry-level Range Rover will grow slightly to make more passenger room inside – one of the criticisms of the first-generation model. It won’t be an all-new car though, because Land Rover is using an evolution of the current model’s D8 architecture. However, the hardware hiding underneath the skin will be tweaked to make the SUV more comfortable and efficient than its predecessor.

The new Evoque could become the first-ever mild-hybrid Land Rover. If rumours turn out to be true, the SUV is getting a system consisting of a 1.5-litre Ingenium petrol engine, supported by a small electric motor using a 48V electrical system. It seems that even if the hybrid version is approved for production, it won't arrive for another two years or so into the life of the new Evoque. But could there be a diesel hybrid version of the Evoque on the cards?

Interestingly, all three Evoques pictured in our shots were registered with the DVLA in December 2017 as black Land Rovers, with little other information to hand other than VN67 in the middle picture, which has been noted as a 2-litre diesel/electric-engined car.

Aside from the possible hybrid powertrain, the next-generation Evoque will continue to be offered with a range of four-cylinder turbocharged petrol and diesel motors from the Ingenium family with power ranging from 150bhp up to about 300bhp. Naturally, all the units will be tweaked to be more fuel efficient and emit fewer CO2 and NOx emissions.

Look for an official premiere during the Paris motor show in early October 2018, with sales starting before the year’s end or early in 2019.