Don't look at the new Hyundai Veloster, it's not coming to the UK 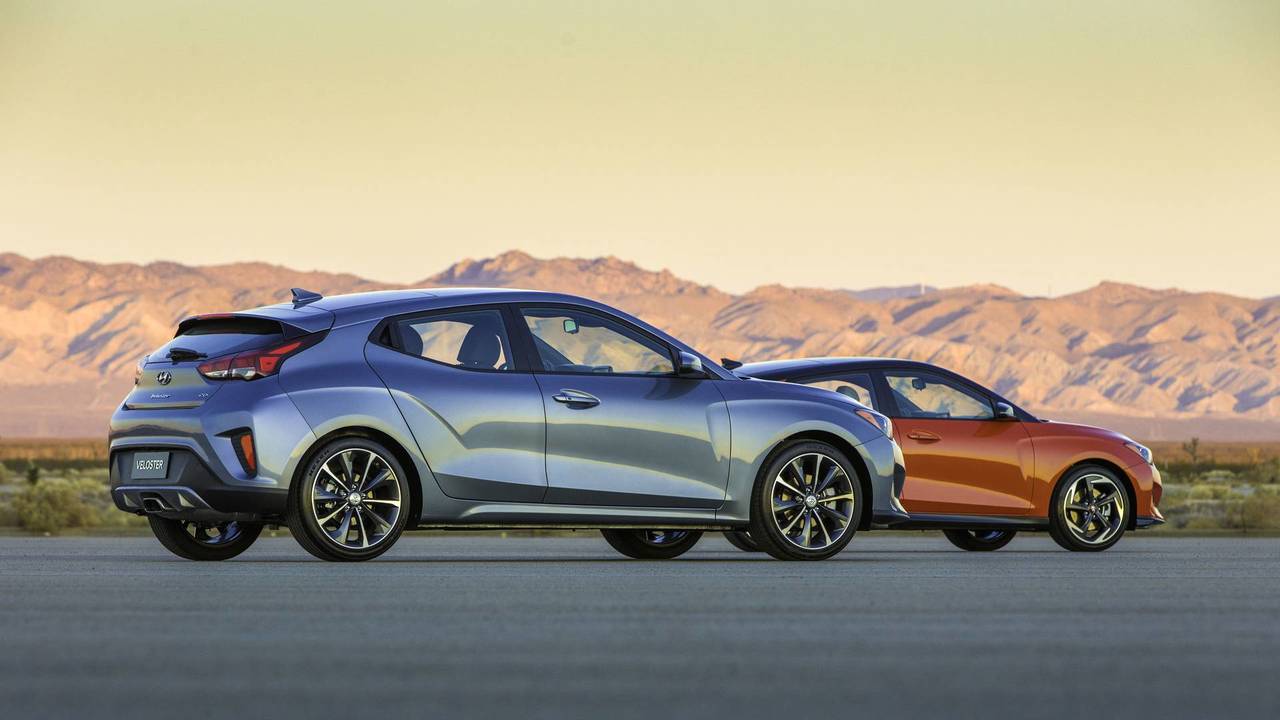 The US and Korea are getting it, but it's not intended for Europe.

Is it a two-door? Is it a four-door? Nope, it's hilariously in the middle. Designed on a day off by some designers with a sense of humour in an age of identical cookie-cutter hatchbacks, the Hyundai Veloster was always an interesting car, and now there's a new one. But sadly, this second-generation 2.5-door car that's just been revealed at the Detroit motor show won't be coming to Europe, it's just for the US and Korea.

The new car was designed by a coalition of designers from Hyundai's Korean and American design offices, and has been comprehensively redesigned both inside and out with an aggressive yet functional refresh. The interior features a contrasting colour arrangement, mirroring the asymmetrical two-plus-one door layout that creates a cockpit for the driver. Inside the cockpit – as Hyundai is calling it – the sound of the engine has been amplified to enhance the driving experience, which, although artificial, is a nice touch for such an accessible car.

Choices of engines to make those fake rumblings consist of a 2-litre engine tuned specifically for low emissions and puts out 147bhp and 132lb ft of torque and a sporty turbocharged 1.6 capable of 201bhp and 195lb ft of torque. Both are available with a six-speed manual gearbox, while the 2-litre has the option of a six-speed automatic and the turbo can be specced with a seven-speed dual-clutch transmission.

The chassis has been tuned for performance. All models in the range feature torque vectoring control that works alongside the electronic stability control to improve handling and even brake inside wheels during more spirited driving. That's complimented by an impressive suspension setup that consists of McPherson strut front suspension, coil springs, gas shock absorbers and a 24mm diameter front stabiliser bar, while at the back there's a lightweight independent multi-link design with a 19mm stabiliser bar to further control body roll.

So it's been designed as very much a drivers' car (yes, a Hyundai), but there's also a bunch of creature comforts too.

Hyundai is really taking its performance credentials seriously with this one. The Korean car maker's world championship-challenging rally team was recently complimented by one of the best hot hatches on earth – and one of the surprises of 2017 – the i30 N. Now, there's another one.

The Veloster N is Hyundai's second road-legal performance offering and was unveiled alongside the other trim levels in the new Veloster range at the Detroit Auto Show. It presents a step up from the already athletic Veloster Turbo. Power comes from a 2-litre turbocharged four-pot, putting out around 275bhp and 260lb ft of torque. The gearbox is, somewhat surprisingly, a six-speed manual, and if you're not Thierry Neuville, it'll rev match for you, making you feel like the professional rally driver you absolutely aren't. Add the sports exhaust option and Hyundai will even throw in some extra pops and bangs for you, too.

The chassis is a lot stiffer than the standard Veloster, while a track-specific N driving mode is added to the standard Normal, Sport and Smart that can be chosen on each Veloster. There's also the option of a limited-slip diff and huge 13.6-inch front and 12.4-inch rear brakes.

Sad times that we won't be seeing it over here...