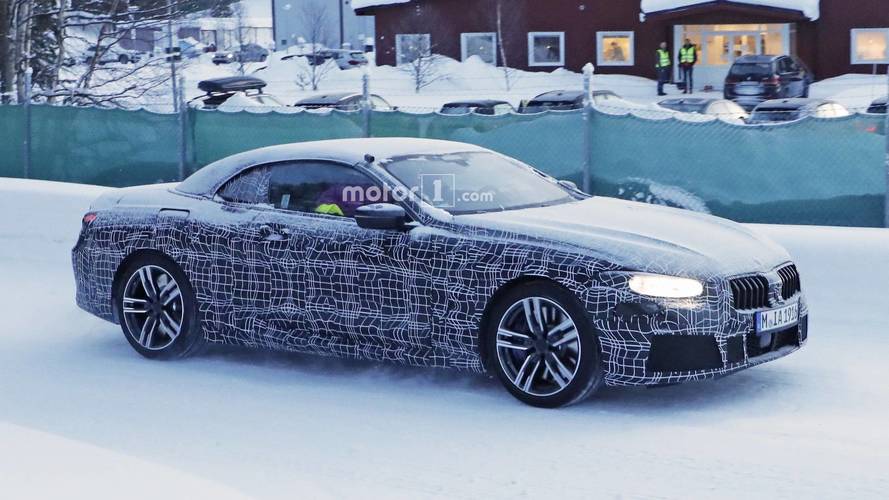 Droptop caught testing – appears to be of the M variety.

The Mercedes S-Class cabriolet will soon have to face a new competitor as BMW is hard at work putting the finishing touches on the first ever 8 Series Convertible. Seen here undergoing testing, the fully camouflaged prototype appears to have all of the production body panels in place, as well as the final versions of the headlights and rear lights. Those rear lights in particular appear to have complicated graphics and could be OLED, as seen on the car's Mercedes rival.

Despite the extensive amount of disguise, it’s easy to see the road-going model will stay true to the 8 Series concept that was unveiled last year and pictured below. The fixed metal roof will be removed to make room for an electronic soft top, while the front and rear bumpers are set to lose those massive air vents for a more down-to-earth appearance.

Even though it’s going to eschew some of the pizzazz on its way to the assembly line, the 8 Series in both coupe and convertible body styles will be quite the looker it seems. The prototype caught on camera by spies had some M extras, judging by the blue brake calipers and what must have been generous air vents lurking underneath the front bumper’s mesh camouflage. Two fat exhaust tips at the back could also be a sign that we’re dealing with a performance version of BMW’s flagship cabriolet.

The M touches seen here likely belong to either the optional M Sport package or they are specially reserved for an M Performance version set to be positioned right underneath the full-fat M8. Either way, we’re dying to see the car without its camouflage, though we will have to patiently wait as the first order of business in Bavaria is to roll out the standard 8 Series Coupe, due later this year.

Aside from the road-going coupe and convertibles in regular and M8 form, BMW has also engineered the new M8 GTE racing car that will compete in the GTE Pro division of the 2018 FIA World Endurance Championship.