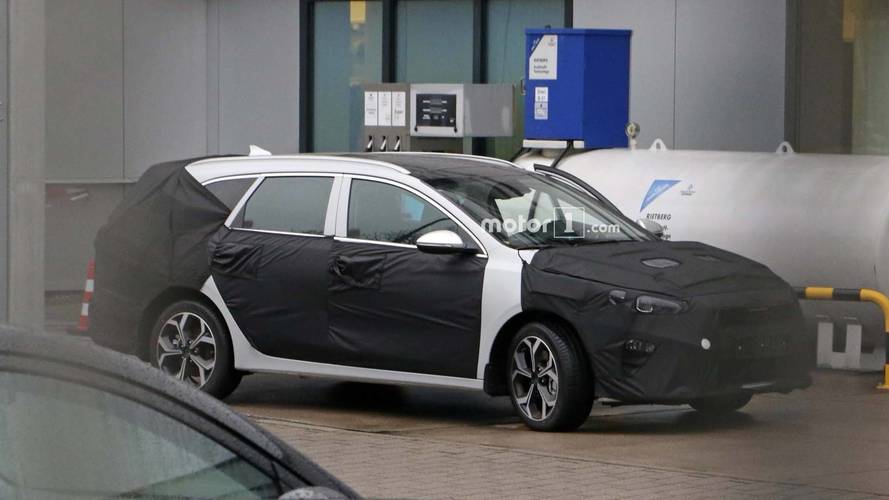 The longer back end and roof racks are a dead giveaway.

Our spy photographers have managed to capture a few sneaky photos of the new Kia Ceed estate, spotted out refuelling during testing at a Kia/Hyundai facility. Only four photos were nabbed of this machine – unfortunately none of them give us a close look at the back end of the new load lugger – the driver spotted the photographer and made a hasty retreat in reverse.

We haven’t seen much of this model, and at a quick glance one might mistake this for the standard hatchback runabout. A close look at the rear, however, reveals the longer side glass and taller roof that doesn’t slope as much as we’ve seen on the five-door Ceed. The estate's roof rails are also clearly seen on this car, though the rest is still well covered.

We also don’t have much in the way of equipment and power details. However, the Ceed is in practice a close relation of its Hyundai cousin, the i30, so under the bonnet is likely a 1.4-litre petrol engine or a 1.6-litre diesel unit, both making upwards of 130bhp. It’s unlikely the base 1-litre three-cylinder will be offered in the larger body style, and it’s also unlikely that we will see anything properly sporty getting shoehorned into the Sportswagen. We’ll go on record as saying – and we're probably not alone in this – that a proper Sportswagon with a 250bhp version of the boosted engine from the Hyundai i30 N would certainly be a fabulous treat.

We originally thought the new Ceed would show up last year at Frankfurt, but actually we're going to see the new car in March at the Geneva motor show, with a sneaky glimpse in the next few weeks if we're lucky. Whether or not the estate will also debut at that the same time is unknown, though if there are any high-performance variants in the works, they likely won’t arrive until 2019.