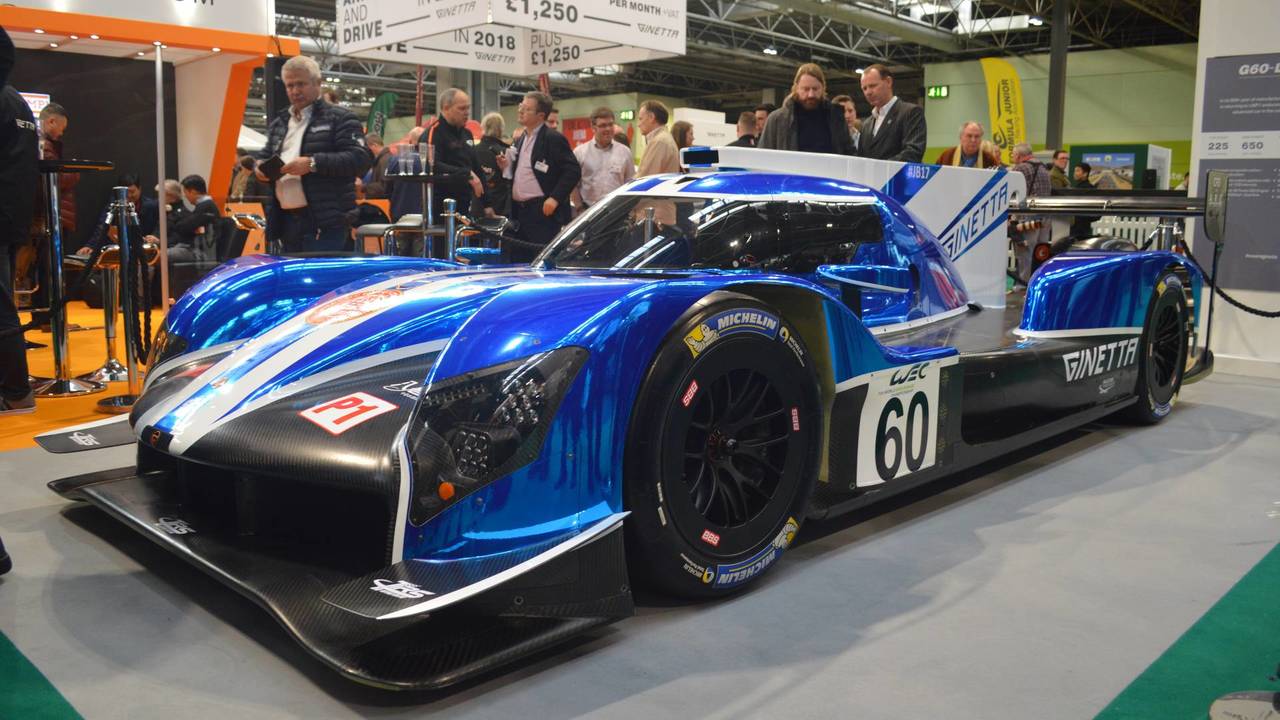 Ginetta has become the first manufacturer to unveil their new-for-2018 customer LMP1 race car in the flesh — or carbon — at Autosport International.

The car, which will compete in the FIA World Endurance Championship this year in the hands of customer teams, was unveiled at the show by Ginetta boss Lawrence Tomlinson, technical director Ewan Baldry, and Manor president and sporting director Graeme Lowdon — whose team will run the car this season.

It's Ginetta's first top-level prototype race car, having previously competed in the LMP3 and LMP2 arenas, and the Yorkshire company put together a who's who of big-name motorsport players to develop the car.

'The core team at Garforth, is only five people, five designers,' explained Baldry. 'We're all confident go-getters, but that said we also recognise that to succeed in a project like this it would be logical to get exterior help on board, and I guess to that end the 'godfather' of the project has been Paolo Catone (designer of Peugeot's Le Mans-winning 908 HDi FAP) whose got recent LMP1 and LMP2 experience and he's been fantastic in terms of making sure we take the right path.'

'We used both Adrian Reynard's (for the aero programme) ARC company in Indianapolis for the CFD and then Williams advanced engineering for the windtunnel programme, and that's been hugely successful so far,' he added. 'Apart from that, some no brainer names: Xtrac for the gearbox, Ohlins for the dampers, AP for the brakes, the kind of people you'd expect to see on a car like this.'

The aero concept for the car, drawing on both Formula 1 and IndyCar expertise, is a radical one, featuring an unusually high nose.

'In terms of the aero package, we've had a joint CFD programme and a windtunnel programme too,' said Baldry. 'We've done a very high nose concept, I think it's probably one of the highest noses that's ever been produced for this type of car and we've seen some great performance gains as a result of that.'

'We've invested heaviliy in making the car very lightweight. This week we've put the car on the scales and it's 750 kilos, which is way way below the minimum weight limit' — so light in fact, that Baldry estimated that Ginetta will have to invest around £20,000 in ballast to bring the car up to the legal minimum weight of 830kg.

The total cost of the car is £1.34 million, but running costs (including an entry fee of just over £320,000) aren't expected to be much higher than the second-tier LMP2 category.

'I think probably just LMP2, plus a bit,' Ginetta chief Lawrence Tomlinson told Motor1. 'The only real difference is the engine deal will be more expensive, parts are a little bit more, but the overall cost of the car and running it should be very similar to LMP2. We pegged it to make it possible for P2 teams to move up rather than the massive step it used to be racing the hybrids.'

Ginetta has a deal in place with Mechachrome for the supply of V8 engines for the car, but customers are free to choose whichever engines they wish for their own cars.

'We’ve got an arrangement with Mechachrome that’s kind of a bulk deal if you like, so anyone coming in and wanting to run this car, we would strongly suggest Mechachrome, but if they wanted to put other engines in it that’s also possible,' said Tomlinson. 'If they wanted to I’m sure they could badge an engine how they want it. We can do anything they want really.'