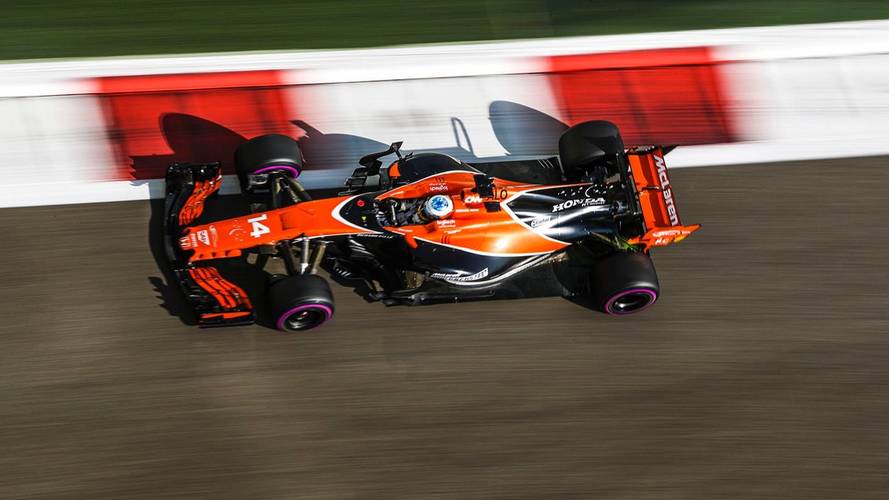 What could it mean – new livery? Three wheels?

McLaren's F1 boss Zak Brown says that the team's look will undergo the 'biggest change' of all the teams on the F1 grid in 2018. McLaren unveiled an all-new black, orange and white livery for last season as part of a freshening up of its image following the departure of long-time chief Ron Dennis.

Since joining the team as executive director, Brown has been keen to do things differently and with McLaren swapping Honda power for Renault this term, fans can expect another change for the brand. 'The car's not going to look the same as last year,' Brown told Motorsport.com. 'Our whole brand, the visibility of McLaren, is going to go to the next level and it's going to be exciting.

'We know what a lot of the other teams are going to look like, but hopefully people will see the biggest change on and off the track at McLaren going into Australia.' When asked if the papaya orange, synonymous with McLaren, will stay, Brown said: 'There will be some nod to our history but we're not done with the livery yet because a lot of that is sponsor dependent.'

As well as the change of car livery, Brown has hinted that McLaren will be doing something bold with its garage in 2018. He added: 'We are calling it a new era, we are back and we are going to have some great things like a new garage. One of the things that McLaren hasn't done in recent years is be a leader.

'With our garage and everything, we look like everyone else – so we need to step up and be the guys in Australia where everyone says, did you see what McLaren did? That is what McLaren always was. I think with our lack of competitiveness, we have kind of blended in. We need to get back to being a team that people are envious of. I feel we are on our way.'

When Brown joined the team, he said it was critically important McLaren picked up a title sponsor after the Vodafone arrangement concluded at the end of 2013. McLaren has yet to secure one but Brown clarified that McLaren is looking at securing a 'principal partner' rather than a 'title partner' to give the sponsor more exposure and protect the McLaren brand.

'We do need a title-level partner, all I've done is dropping the vernacular of title into principal and have looked at all of our commercial assets, which is not just the race car it's our other forms of racing and things like our building and war rooms and things of that nature, and have looked at what's the best way to commercialise the world of McLaren,' he said. 'Going through that exercise developed a plan that doesn't require a "title partner".'

'I don't really feel there's that much value in the sponsor's name being part of the team but I do think it slightly diminishes the value of the name of the team when it's being co-branded.'

Brown said the commercial future looked positive with more companies set to align themselves with McLaren this term. 'We've signed three partners so far that we will start to announce and hopefully a few more,' he said. 'We won't be sold out next year [2018], it takes time, but I'm really happy with the on-track direction of the team, our driver line-up and our off-track, our commercial, our marketing engagement with the fans. It's a great company with a great brand that has been under-leveraged in recent times.'