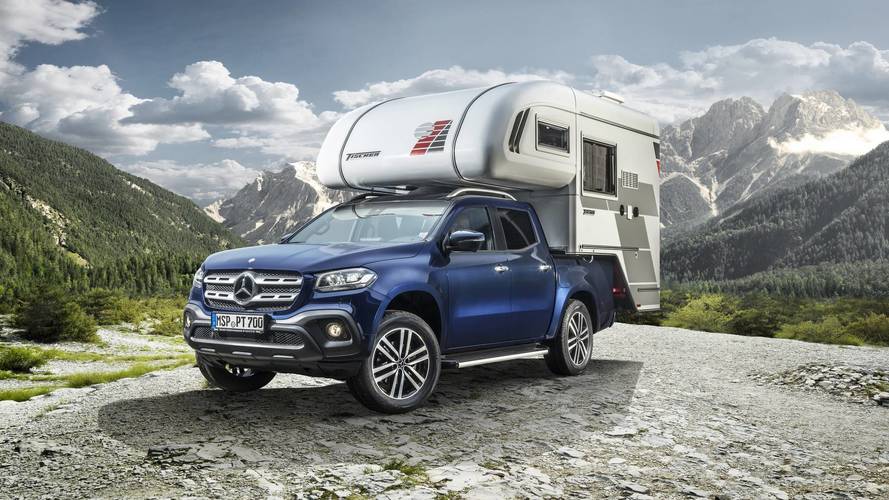 Mercedes caters for those who enjoy the great outdoors with its Marco Polo motorhomes and now it’s about to add more diversity by giving the X-Class pickup a camper van conversion. Truth be told, the package doesn’t come straight from the car maker as it’s provided by a German company called Tischer that specialises in turning pickup trucks into something you can spend your holidays in.

A quick look on the firm’s website shows it offers similar conversions for a wide variety of models, including the Volkswagen Amarok, Land Rover Defender, Nissan Navara, Toyota Hilux, Isuzu D-Max and Ford Ranger. The fact that it’s adding the X-Class to its portfolio doesn’t come as a big surprise when you take into account Mercedes’ posh workhorse is based on the Navara, much like the Renault Alaskan.

The demountable cabin encompasses a cozy sleeping area in a 1.5m-wide alcove and with nearly 2m of headroom. It comes with plenty of space for three seats and a kitchen with a three-hob gas cooker to prepare food on the go. Should you need a second bed, those three seats can be transformed into an extra bed without much of an effort.

Other goodies included with the X-Class camper van conversion worth mentioning would have to be the fold-away wash basin, a swiveling toilet unit, and a built-in bathroom roomy enough for a shower. Mercedes wishes to point out the sandwich configuration of the cabin guarantees stability at all times and also a high level of insulation.

Alternatively, the X-Class can be fitted with a heavy-duty pull-out module courtesy of VanEssa, a Germany company providing various vehicle add-ons for those with an appetite for camping. It weighs approximately 250kg and bundles a fully loaded kitchen, complete with niceties like a coolbox as well as space for supplies and crockery. Not only does it have cooking and washing-up facilities, but it also boasts a second pull-out module with extra space for your bits and pieces.

You won’t have to worry about damages caused by water as the load compartment is covered with teak wood resembling the deck of a yacht. There’s even a roof tent with a rear-facing entrance for extra privacy.

Mercedes will showcase the X-Class camper van conversions from 13-21 January the Caravan, Motor, Touristik (CMT) show in Stuttgart next week.