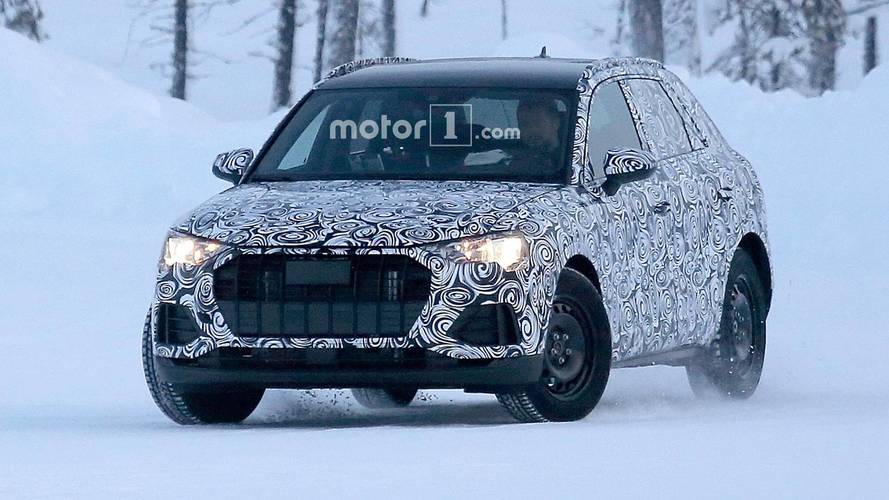 The new version of Audi's baby SUV is set to grow a bit bigger.

Audi has shipped test mules for the next-generation Q3 to the snowier portions of Europe, and our spies caught the cold-weather evaluations. While the company doesn’t overhaul the premium crossover’s looks, there are major changes underneath the sheet metal.

The new Q3 moves to Volkswagen Group’s MQB platform, and the switch is all set to bring major benefits such as lower weight and cheaper build costs. The wheelbase will grow longer, which will allow for more room inside. The body’s overhangs also appear shorter, which also makes the model appear somewhat bigger.

The camouflage here hides the exact changes to the body, but Audi’s designers appear to take an evolutionary route for the latest generation of the Q3. Up front, the grille is much larger than the current model, which gives the new crossover a more aggressive look. In profile, the more steeply raked hatchback does give the Audi a suitably sleek silhouette.

Spy shots haven’t yet provided a peek inside the new Q3. However, expect Audi’s high-tech Virtual Cockpit digital instrument display to at least be an option, if not a standard feature on higher-level trims. Infotainment system and driver assistance upgrades are also very likely.

Moving to the MQB platform also opens up the powertrain options for the Q3. Depending on the market, buyers will be able to choose from a wide array of three- and four-cylinder engines. A plug-in hybrid is reportedly planned to join the Q3 lineup later on. At the very top of the range, the RS Q3 will use Audi’s perky 2.5-litre five-cylinder engine.

The new Q3 is likely to debut in the first half of 2018, and it’ll be on sale in some markets before the end of the year.