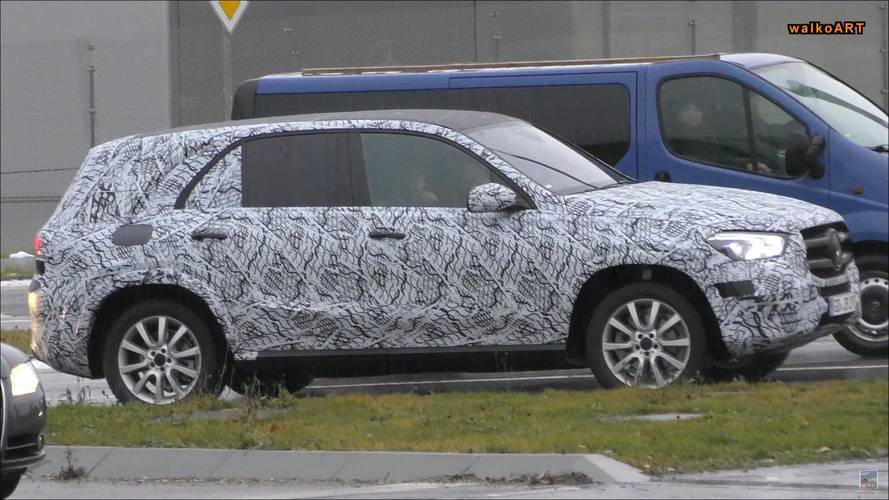 The SUV's fresh new look could be a bit more edgy than previously thought.

We’ve been seeing the new Mercedes-Benz GLE-Class quite a bit as of late, which suggests a full reveal isn’t too far away. This spy video doesn’t reveal too much we don’t already know, however the camouflage wrap around the new SUV's headlights seems to have been pulled away on this prototype, giving us our best look yet at the Mercedes’ new eyes. Compared with the current model, the next-generation GLE looks like it will feature some sharper lines up front, while also gaining some size for rear seat occupants and cargo.

That’s not to say the new GLE will gain weight, however. Mercedes is underpinning the SUV with its new MRA platform that will extend the wheelbase while also reducing weight. That will certainly help the aged GLE put up a fight in the extremely competitive luxury SUV segment against rival machines like the Audi Q7 and Porsche Cayenne.

The weight reduction also means the new GLE-Class will likely enjoy better all-round performance. We’ve seen both standard and AMG variants in the testing phase, with base GLE models expected to get a turbocharged 3-litre inline six-cylinder engine. Hybrid models with over 400bhp are thought to be in the cards as well, but the horsepower junkies will certainly flock to the AMG version.

Exactly what will power that model isn’t yet known – it could get the 4-litre twin-turbo V8, or it could be an amped up hybrid with prolific electric power to accompany its petrol engine. However it pans out, horsepower should top 500. And if the weight reduction from the new platform is as aggressive as we’re thinking, that mill could have less than 2,000kg to deal with. That’s quite a combination for a high-performance car, never mind an SUV.

The new GLE-Class is expected to be revealed sometime next year as a 2019 model, with the AMG derivative following for 2020.