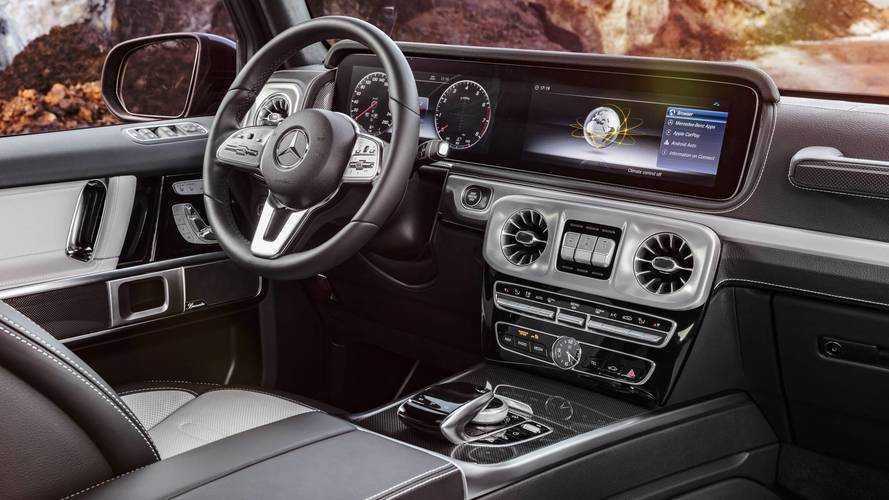 Mercedes has revealed pictures of its new 2018 G-Class off-roader, we've been inside.

Mercedes has revealed the first official images of the interior of its new G-Class off-roader – the first all-new version of the iconic G-Wagen since 1990.

Motor1.com had early access to a prototype of the G-Class to experience the new interior first hand, and it’s a definite improvement on the outgoing model.

A tour of the car with the lead designers on the project revealed that the door handles and spare wheel cover on the back of the car are the only parts to remain from the old model. Engineers and designers tried a number of different solutions to try and maintain the signature clunk of a G-Class door closing, but found the only way they could do it was to keep the old mechanism.

What's in and what's out?

Out is the sheer cliff of dashboard and old-fashioned layout, in comes new technology grabbed straight from the likes of the S-Class and E-Class, with fancy touchscreen displays and a more elegant design. Two 12.3-inch screen dominate the dashboard, with customisable digital instrument display for the driver and separate infotainment screen being linked together in one band across the dash.

Purists might miss the old-fashioned mechanical handbrake that is on the outgoing model, but Mercedes says that its electronic parking brake works much better and it didn't make sense to keep the lever there.

Other G-Class staples remain – the passenger grab handle is still there, and the driving position with peerless view along a wide expanse of bonnet remains. As do the slim, upright A-pillars, which make for great visibility out of the front of the car.

Anyone who has driven a G Wagen off-road will recognise the three buttons in a row that sit right in the centre of the dashboard – they control the locking differentials, all three of them. With the demise of the Land Rover Defender it makes the G-Class the final standard bearer for an old-fashioned approach to off-roading that has long since been replaced by electronic trickery.

Rear passengers will appreciate the effort that has been put into increasing legroom, and head and shoulder room, with plenty of space for three passengers in the second row. The redesigned seats are comfortable all round the car, adding to the understated luxury of the old model with a bit of well-placed ostentation.

A particularly exciting option up front – over and above the heated, massaging seats – is the new function where the car automatically fills and empties air pockets in the cushions based on what the car is doing. Ideal to help keep you pinned in your seat when off-roading enthusiastically.

The car's designers say that while the interior influences are there from the rest of the range, they've also tried to echo some of the signature exterior design cues on the dashboard – the air vents are said to have been designed to resemble the car's headlights.

The G-Class – also known more fondly as the G-Wagen, or Geländewagen, which simply translates as off-roader from German – was first introduced in 1979 and has a tradition of long lifespans. The new car is only the third generation of G-Class, since the original lasted 11 years before being replaced. The 27-year reign of the second-generation car is almost unprecedented, the G-Wagen representing one of the longest-lasting cars ever produced.

There’s not long to wait until we see the new G-Class revealed – the full car will be unveiled on 14 January 2018 at the Detroit motor show.