New Audi A6 spied and it's missing its four rings 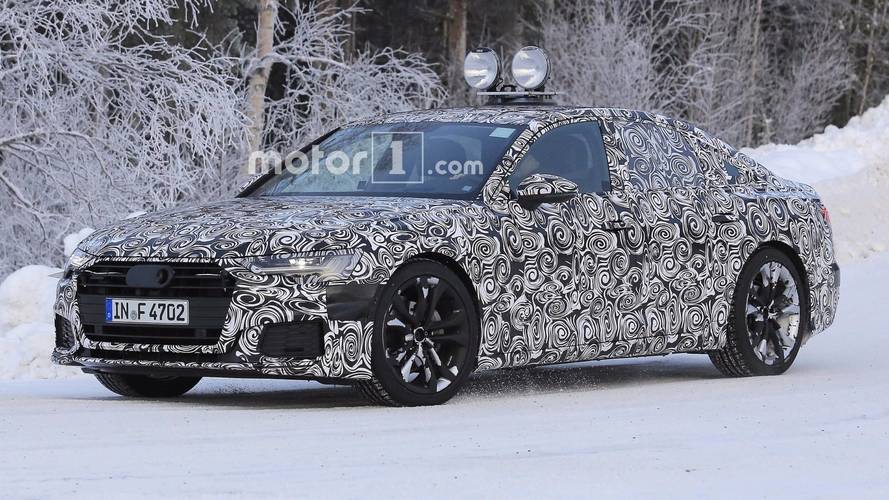 Is it getting Audi's traffic jam pilot system?

Just 10 days after we saw the next generation Audi A6 testing with its production lights on for the first time, the very same prototype is spied again, looking virtually unchanged. It’s still wearing a lot of camouflage foil, as well as a set of additional lights mounted on a special roof bar, but this time we are especially interested in the radiator grille.

It’s where a massive cluster of radars is mounted, hidden underneath a black plastic cover, most likely there for protection purposes. It’s positioned right where the Audi four-ring logo should be and has approximately the same overall shape and dimensions as the emblem. Upon closer inspection, you’ll also notice two smaller radars at both sides of radiator grille, connected to the main unit through small white cables.

We can’t be completely sure what these radars are for, but most likely they will be used by a semi-autonomous system, set to be part of the optional equipment of the new A6. Audi’s traffic jam pilot self-driving system, which debuted on the new A8, will be active at speeds of up to 37mph.

Based on the MLB Evo platform, Audi’s rival for the Mercedes-Benz E-Class and BMW 5 Series will be lighter and slightly bigger than the outgoing model, and will share many design elements with the new A8 and A7 Sportback. The first from the range to arrive will be classic saloon, which should debut at the 2018 Geneva motor show, followed by an Avant-badged estate version and the rugged A6 Allroad.

We don’t have official information about the engine lineup, but we can assume it will be identical to the A7 Sportback – a wide variety of four- and six-cylinder diesel and petrol units – all turbocharged, naturally – as well as larger range-toppers.