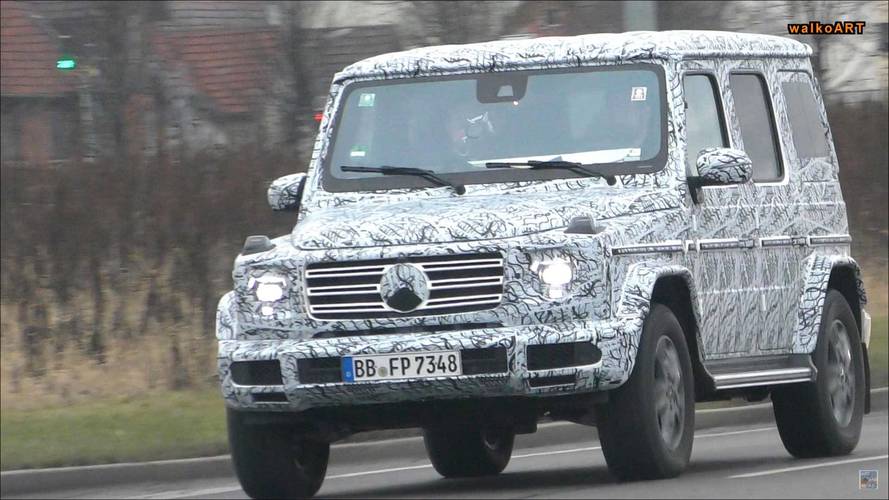 We could learn all about this new model as early as next month.

Here’s another look at the forthcoming Mercedes-Benz G-Class, captured on video while testing on the road. There really isn’t anything groundbreaking to tell from this clip, though the darker lighting outside does help us get a better look at the headlights, which despite the camouflage wrap still appear to be round – a G-Class styling cue that dates all the way back to the original Geländewagen from 1979.

The new G-Class doesn't really look that different when covered with camouflage – it's still very much the tall, boxy SUV that people know and love, but looks can be deceiving. We know that there’s all kinds of new stuff underneath including a modified ladder frame – meaning it will keep its body-on-frame construction.

We also know it will be slightly wider and feature a new independent front suspension setup, and though the body doesn’t look much different, it will get a significant infusion of aluminium to create a new G-Class that’s a bit bigger, but also a bit lighter than its predecessor.

We also know that Mercedes will continue to make the G-Class a thoroughly capable off-road machine – the new car keeps its low-range gearing and three differential locks to distribute power in a very precise, deliberate manner when needed. An electromechanical steering system is in the works and a nine-speed automatic will process the power from the engine.

Speaking of which, it looks like the crazy V12 G65 AMG won’t be part of the new G-Class line. That’s not to say the new model won’t have its own share of bonkers editions – a G63 with over 600bhp is thought to be on the table, along with variants using the 4-litre twin-turbo V8 as well as six-cylinder options.

We've already seen the interior of the new G-Class, but Mercedes has announced that it will reveal the full car at the Detroit motor show in January 2018 – so just a few weeks more to wait.