The Grand Tour season two, episode one review – the boys are back 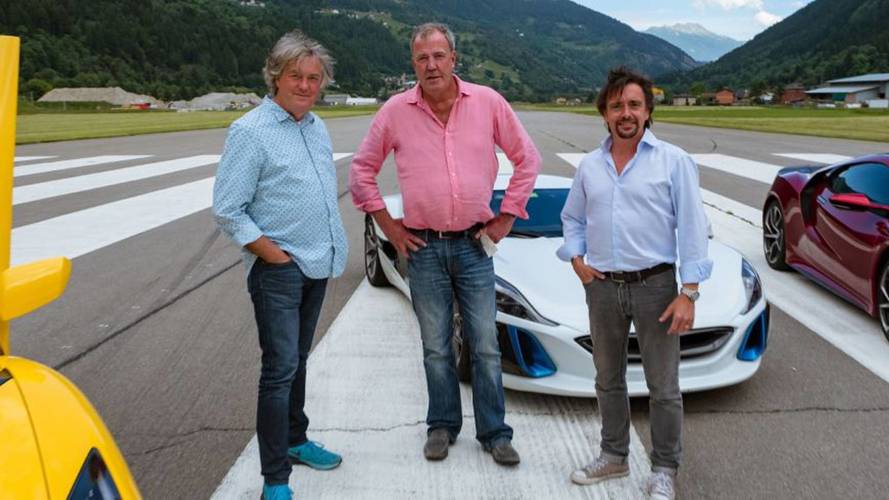 Greying hair, racist undertones – it seems strange for Netflix to launch its second series of royal drama The Crown on the same day that the second round of Amazon Prime flagship motoring drama The Grand Tour goes live. Strange, but oddly fitting.

‘We’re BAAACK’, yells Jeremy Clarkson to a rapturous reception from an adoring rent-a-crowd. The biggest change from series one to series two is the fact that James May has had a haircut, that reveals the sort of rosy cheeks you’d find on a Hummel figurine.

Amid the perils of an uncertain future capped by political turmoil and a topsy-turvy economy, conservative Britain can always rely on Clarkson, Hammond and May to hold the ground on that corner of a field that is forever England. They’ve literally pitched a tent on it. The only reliable indicator of time is the inexorable downward passage of jowls.

The show jumps straight in with a Titanic-style supercar segment – you know how it ends with certain disaster, just not how they get there. You can guess, of course – hooning about on closed roads? Check. Radio banter? Check. It’s all a bit self-conscious these days: ’It’s so good to be back doing what we do,’ gurns Clarkson from behind the wheel. ‘Driving round corners a bit too quickly while shouting and bickering.’ And getting paid lots of money for doing it.

The celebrity format is a loose mix of ‘five degrees of separation’ and the more pragmatic ‘who’s available this week?’ David Hasselhoff looks like an animatronic celebrity, unconvincing PVC pulled taut over a robotic face. Ricky from The Voice has been bundled into the back of a van by a publicity team and doesn’t know where he’s landed.

Surely Jaguar’s PR team will be wincing back in Coventry at the site of their F-Type being slung around over damaging gravel – but even this is an awkward elbow nudge back to the BBC. ‘This has definitely never been done before’, says Clarkson in voiceover. It’s series two, there’s lots more money, more creative freedom and the world is the proverbial oyster – and still half an eye on the Beeb, that disapproving estranged parent.

Not that any of this wouldn’t be at home with Top Gear branding – the news segment of the show is given over to rutting foxes, the drive feature descends into chaos as the chaps inadvertently do everything wrong to comic effect. Hammond remains chirpy, May grumps and Clarkson punches someone in the face. Probably.

An Iraq war joke from 10 years ago is about as edgy as it gets. Well, that and Hammond’s Swiss crash. ‘This could go so wrong,’ chirps Hammond as he squeals round a corner. The moment itself – the one we’ve clearly all been waiting for – is dealt with via a series of YouTube mashups and hastily grabbed footage by a camera crew clearly taken unawares, a brief shriek of ‘Oh, crap’ from the hapless presenter as he tumbles off a hillside.

As seems to be the way with this trio, the best bits happen off-camera. With well-honed personas and tight – if patchy – scripting, perhaps this is what we need to see a bit more of. ‘Oh, honestly, I can’t be bothered,’ exclaims May in a rare moment of clarity. Still James, pays the bills.