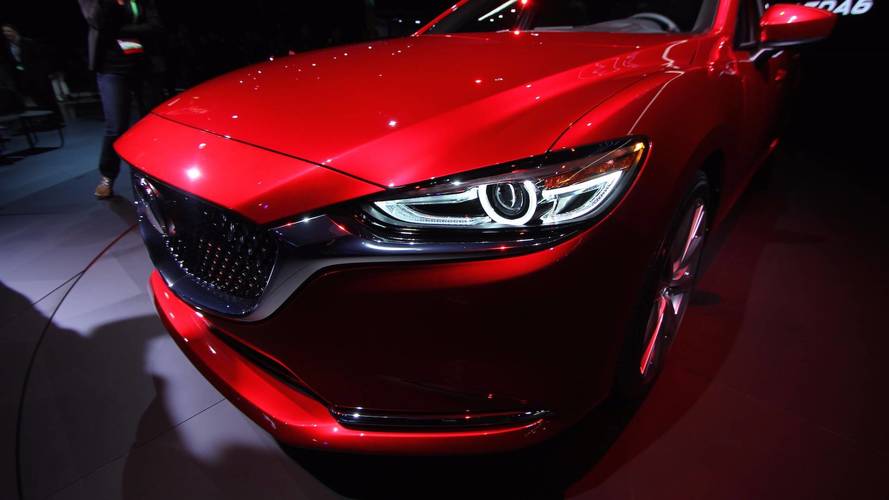 Mazda has only gone and done a facelift.

Mazda has unveiled the latest iteration of its flagship Mazda6 saloon at the Los Angeles motor show, a car that the Japanese manufacturer says has been 'thoroughly re-engineered and refined' compared with the outgoing model, thanks to new powertrain technology and more 'premium' design details.

The US engine choices includes the Skyactiv-G 2.5-litre direct injection petrol engine with a cylinder deactivation system that seamlessly switches between four and two-cylinders to increase fuel efficiency without damaging performance. A turbocharged version of the engine that was first seen in the Mazda CX-9 SUV, meanwhile, will also be available.

We're still not sure what engines will feature on the UK version of the car – likely developments of the exist 2-litre petrol and 2.2-litre diesel motors that are available in various states of tune.

In terms of the design, the look and feel of the Mazda6 has been enhanced both inside and out, with the exterior clearly influend by Mazda's recent Kai Concept and the latest interpretation of the company's Kodo design language. Inside, materials such as Japanese sen wood are used to enhance the interior.

Safety features such as Mazda's radar cruise control are fitted – this can bring the car to a standing stop and get it moving again when the vehicle in front pulls away. Mazda's latest 360-degree view monitor also features.

Pricing details haven't been released, but we won't have to wait long. The 2017.5 Mazda6 (yes, that's what the company is calling it) will be on sale during the first half of 2018.