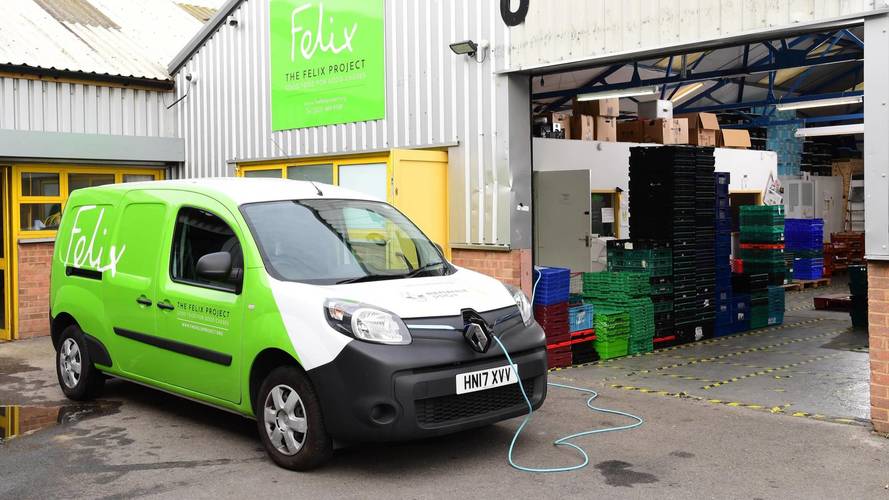 London-based charity project is using EV to deliver food to those in need.

Renault has teamed up with a London-based charity to help some of the capital's most vulnerable this winter.

The Felix Project is using the all-electric Kangoo Van Z.E. to help reduce food waste and food poverty across London. The award-winning electric van forms part of the Felix Project fleet, which collects over 10 tonnes of food a week from supermarkets, wholesalers and other suppliers. The food is perfectly fine, but can't be sold for various reasons. The project then distributes it free of charge to charities throughout London, who provide meals, snacks or food parcels to elderly or homeless people, those with mental health issues, refugees and asylum seekers.

The Kangoo Van Z.E. is saving the charity a significant amount compared with running an equivalent diesel van – thanks to its advanced drivetrain consisting of a separate battery and electric motor, the Kangoo Van Z.E. can carry a payload of 640kg, while its automatic transmission makes driving on busy London streets stress-free, says the charity.

'Our drivers really like the Kangoo Van Z.E. because it’s so quiet and relaxing to drive. It’s easier to manoeuvre and park in narrow streets than the larger vans we use and, of course, there will be a huge saving in diesel,' said Annie Elkins, project co-ordinator. 'It’s absolutely amazing to have this support from Renault, and this electric vehicle fits in with our messages about protecting the environment by reducing waste and using nutritious food rather than throwing it into landfill.'

Vincent Tourette, managing director of Renault UK, added: 'We are delighted to support The Felix Project in its invaluable work by providing an all-electric vehicle which perfectly fits their needs. The Kangoo Van Z.E.’s low running costs and its exemption from the congestion charge will allow the charity to spend its money where it is needed. Its impressive range will allow it to keep working, delivering food without having to stop and charge up, and its quiet running and zero emissions will be appreciated by people local to the collection and deliveries.'

At the recent GreenFleet awards, Renault was awarded the title of electric vehicle manufacturer of the year at the 2017. The company's range currently includes the Zoe city car alongside the recently upgraded Kangoo Van Z.E.33, with more EVs set to be introduced in the coming years.