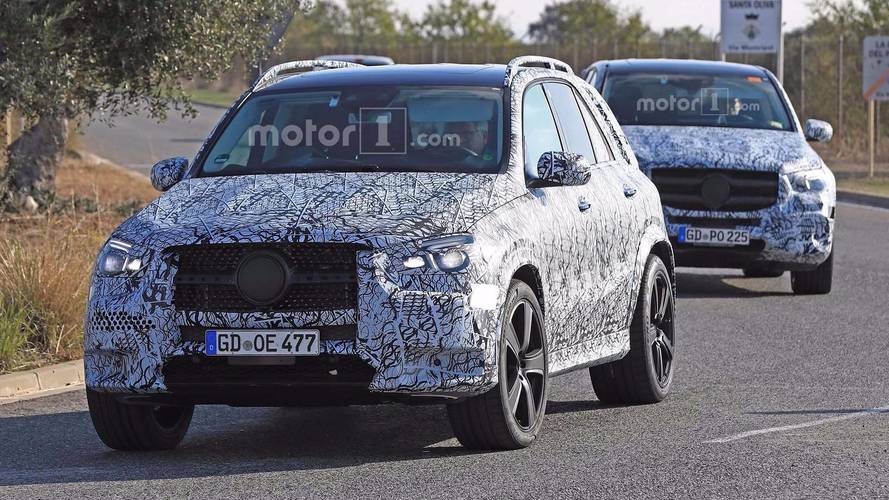 The next-generation of people movers from Stuttgart will gain size while losing weight.

Everyone has got loads of SUVs on the go at the moment, and Mercedes-Benz is certainly not going to be left behind with updates to both the GLE-Class and GLS-Class in the works. We’ve seen both separately, but spy photographers recently caught the two models testing in the same area. Compared with previous spy shots we've seen there's nothing much new on display here, though the crystal-clear images give us a lovely detailed view of both models.

The big news for the GLE is a significant drop in weight for the medium-size SUV thanks to its new MRA platform. Despite a longer wheelbase that should equate to more passenger room, it’s rumoured that the new GLE will check under 1,800kg, which will certainly help both performance and fuel economy figures. Considering the current GLE dates back to 2011, Mercedes sorely needs this new model to stay competitive in this very demanding area of the market. It should be revealed at some point in 2018.

Super-sized families who like Mercedes will have a new seven-passenger GLS coming soon as well – like its GLE sibling, the GLS is expected to lose weight while also gaining some size. The current facelifted version of the GLS was only revealed back in 2015, so we've got another year or two before this car makes its way on to the market. It was introduced as the second-generation GL-Class in 2012 before Mercedes took the opportunity to rename it with the 2015 facelift to bring it into line with its other SUVs in the range.

Though it looks somewhat bulky, a much more sleek design exists under the strategically placed camouflage. It too will utilise the MHA platform for additional interior space, and rumours now suggest the flagship SUV could get a Mercedes-Maybach treatment to compete with the Range Rover SV Autobiography and Bentley Bentayga.

Both models should receive the latest in Mercedes autonomous systems as well as the glass cockpit treatment, and AMG models will surely follow on after the mainstream offerings are released on sale. The GLE could get as much as 500bhp in a hybrid model, likely pairing the brand’s 3-litre six-cylinder turbo engine with an electric motor. The same engine will likely serve in the GLS, though AMG variants would almost certainly feature the company's twin-turbo V8 number.