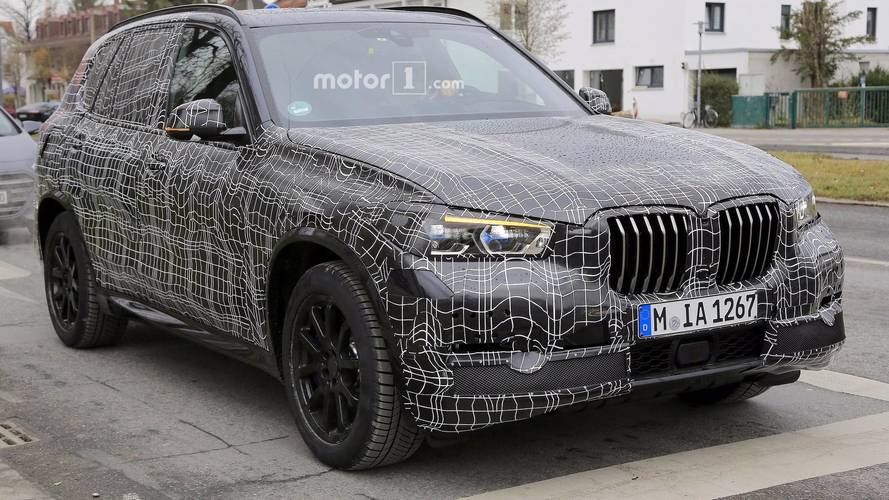 BMW is well into its testing cycle for the next generation of X5 SUV. This was the first of the company's high-riding utility vehicles to be launched back in the day and we're almost on to the fourth generation, which will be revealed sometime around the summer of 2018.

For the latest spy photo session, the next-generation BMW X5 has changed its attire – it's now wearing a more menacing black wrap with a white grid pattern. It doesn’t seem to be an ordinary version as judging by the blue brake calipers and fat exhaust tips, we could be dealing with a spicy M Performance version. After all, there are rumours of an X5 M50i on the way, so this might very well be it.

Despite the full body camouflage, the next X5 is already shaping up to be considerably sportier than the current model, which won't get a mid-life facelift but will jump straight to the next generation. While the design will be evolutionary with an emphasis on making it more aggressive, underneath the metal it will essentially be an all-new vehicle.

BMW's CLAR platform should enable a significant weight loss thanks to more extensive use of lighter materials, even though the new X5 might be a little bit bigger. There is a distinct possibility the wheelbase will be a tad longer, which along with the better packaging brought by the new architecture, will enable a more spacious cabin for passengers and their luggage.

This potential X5 M50i won’t remain the top dog in the family for too long as you can rest assured there will be another fully fledged X5 M, complete with the latest evolution of BMW’s 4.4-litre twin-turbo V8 engine pushing out a healthy 600bhp in the new M5. The latter is getting a Competition Package with even more power, so maybe some of the added muscle will find its way underneath the X5 M’s hood as well.

It is believed the standard versions of the fourth-generation BMW X5 (codenamed G05) will see the light of day in the summer of 2018 and will come out with a range of new and revised petrol and diesel engines. The aforementioned M50i might join them from day one considering the X3 was shown holding hands with the hotter X3 M40i. A plug-in hybrid is once again on the agenda, but apparently not the xDrive40e we're familiar with as a recent report indicates it will be replaced by an xDrive45e model with slightly more power.