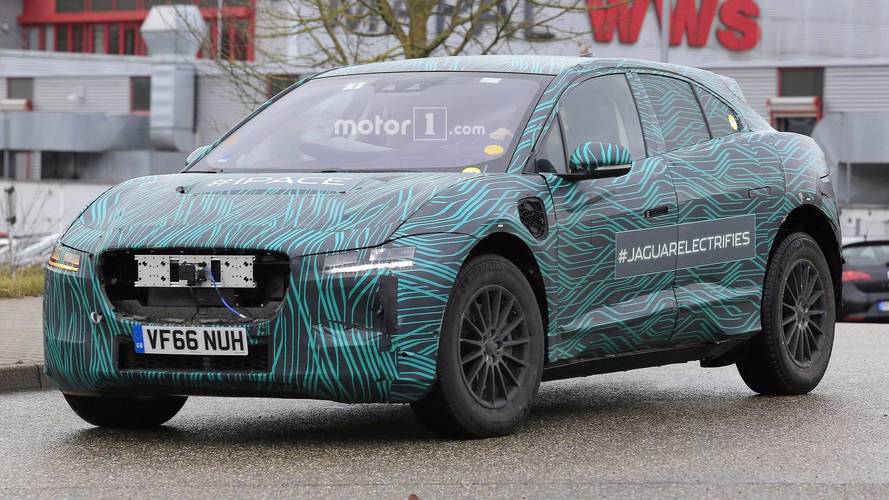 One of the prototypes was missing some of its body panels.

Introduced a little over a year ago as a concept during the Los Angeles motor show, the Jaguar I-Pace has been caught by our spy cameras once again undergoing final testing ahead of going on sale. A total of three near-production prototypes have been spotted up close, but only the one with the number plate ending in 'NUH' has really managed to grab our attention.

Not only is it missing the front grille, but it also lacks the cap on the front fender where the charging port is located. In addition, the handle belonging to the driver’s door is also missing, while the rear end is plastered with a lot of black duct tape. It’s there either to hold the camouflage in place or to conceal something that Jaguar doesn’t want us to see. We’re leaning towards the former considering that particular I-Pace isn’t in the best condition as the camouflage appears to be peeling off to reveal small sections of the production body.

More from the I-Pace:

There’s not much of a mystery regarding the exterior design as it will remain pretty much faithful to the namesake concept. It should be a similar story with the interior, which our spies managed to grab on camera back in August.

Not only will the appearance stay pretty much the same, but also the technical specifications. It means motivation will be provided by two electric motors developing a combined output of around 400bhp and 516lb ft of instant electric torque. The production-ready Jaguar I-Pace will have all-wheel drive and is expected to use a large battery pack with a capacity of 90kWh for the range-topping version, which should mean it's good for 310 miles under the New European Driving Cycle. Needless to say, these numbers may change on the production model.

Considering Jaguar hasn’t brought the final version of the I-Pace to the 2017 LA motor show, chances are the fully electric SUV will make its production debut at the beginning of next year during the Detroit motor show and then make its European debut in Geneva in March 2018.