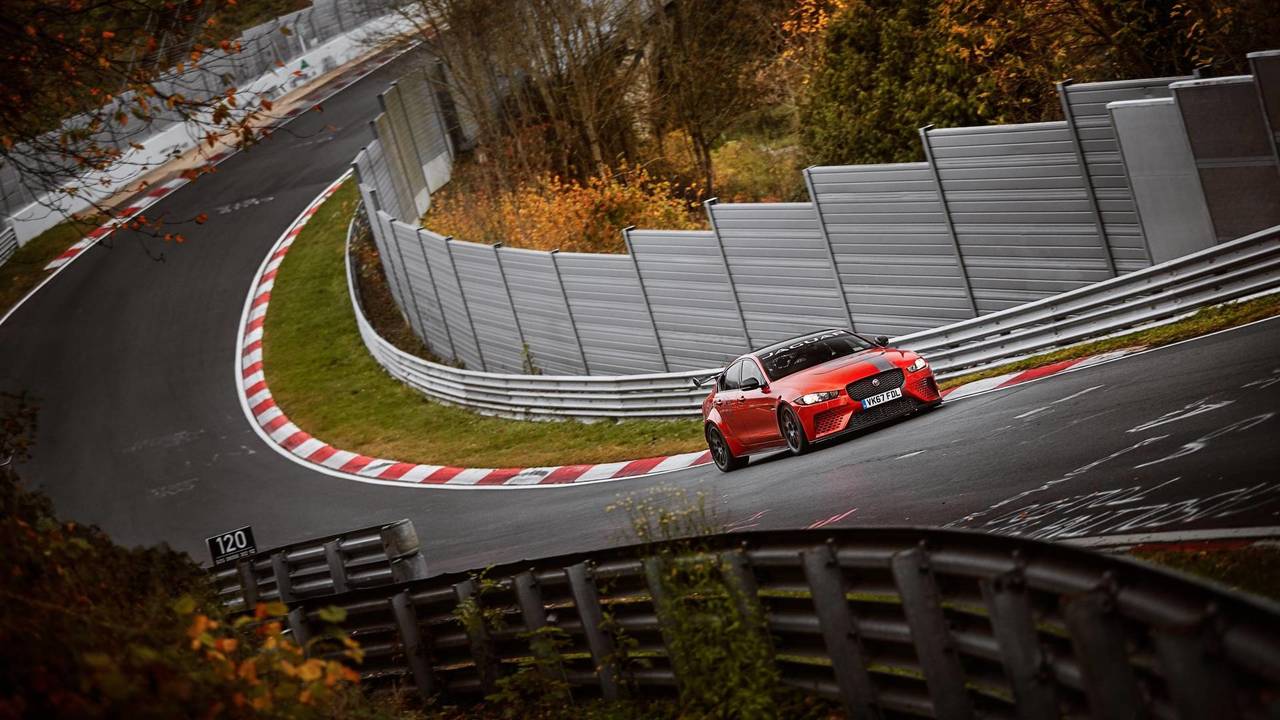 The super saloon from Coventry has set a new Nürburgring lap record.

Jaguar's new XE SV Project 8 is officially the fastest saloon around the infamous Nordschleife circuit at the Nürburgring in western Germany, with a lap time of 7:23.00. The company hasn't said who was driving the car, but the time lops a hefty 11 seconds off the previous best by a production four-door saloon, mingling with some supercars and two-door coupes in the timesheets.

You can watch onboard footage of the lap at the bottom of the page, and it makes for quease-inducing viewing.

The car is being built by hand at Jaguar's Special Vehicle Operations division, and 300 of the left-hand-drive-only cars will be made available around the world. It will cost £149,995 in the UK.

'The SVO design and engineering team’s mission was to create the most track-focused road-legal Jaguar in history – not only the fastest, but also the most agile, said SVO director Mark Stanton. 'As a result, only the roof and front door skins of Project 8’s body are carried-over unaltered from XE and 75 percent of its mechanical hardware is new. This astonishing Nürburgring Nordschleife record validates the success of such extensive changes.'

Based loosely on the XE saloon (only 25 percent of its original parts remain), the Project 8 is powered by a 592hp supercharged V8 engine providing an incredible 516lb ft of torque. That means the track-focused Jag is good for more than 200mph and covers the 0-60mph run in just 3.3 seconds. Supercar territory.

Go-faster gear includes a mighty downforce-generating rear wing along with headlights that have been moved forwards to make room for the track-biased Michelin Cup tyres. Jaguar's Special Vehicles team has resorted to extensive use of aluminium and carbonfibre to reduce weight, while a Track Pack is also available. This shaves off an extra 12.5kg off the Project 8's 1,757kg weight, while using race-specification front seats and swapping the back ones with a roll cage.

The specialist JLR SVO department, whose HQ is based on the site of the old Peugeot factory on the outskirts of Coventry – is going to build 300 of them, for global distribution, in its second production car project after 2014's Jaguar F-Type Project 7. That had a supercharged V8, too - but the Project 8's is more powerful.