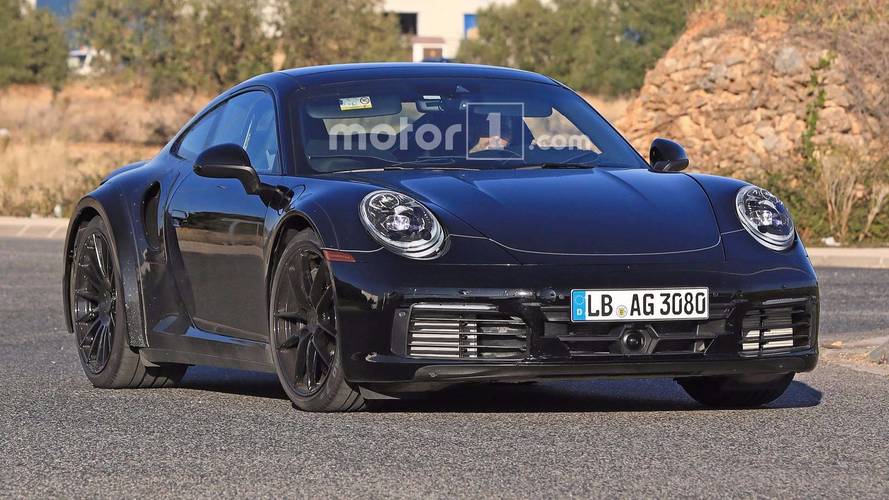 It won't arrive until 2019, but it should be worth the wait.

A new generation of 911 is on its way, and it case you haven’t heard, it still pretty much looks like the old one – even the Porsche 911 Turbo model which is captured here, testing on the road. The new style certainly appears to be an evolution of the current 991 series, though things do seem to have been straightened out a bit in some areas, most notably up front. We see a straighter front nose and a straight edge to the bonnet, with massive lower air intakes that look rather squared-off as well.

The overall affect is that the new Porsche looks a bit less happy. We’re fine with that.

Looking a bit further back, it seems the 911 will once again be adding some girth to its overall presence. The car definitely looks wider, especially in the rear where bolt-on plastic is still concealing quite a bit of detail. In plain sight are the Porsche’s double daytime running lights up front, all concealed in the single headlamp housing.

As for what the new Porsche will look like inside, right now we can only speculate. It’s possible the car could get a version of Audi’s digital Virtual Cockpit, replacing the analogue instrument panel with a single electronic display that can be customised to show a wide range of information. We suspect purists might find the feature a bit frustrating, but that will all be for nothing once the accelerator is planted.

That’s because horsepower from the boosted flat-six in the back is expected to climb. To what level isn’t yet known, but the current Turbo S already produces 580bhp, with the extremely limited-production Turbo S Exclusive producing 607bhp. It’s certainly not a stretch to see the next-generation 911 going past 600, with special edition models going higher still. So too will 0-62mph times in low-to-mid two-second range not be out of the question.