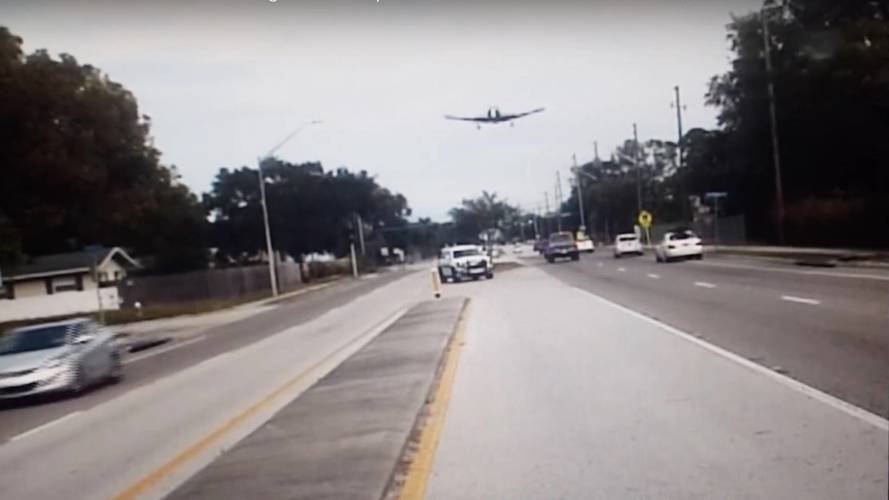 Pilot got into difficulty returning to his local airport.

A US sheriff’s dashcam has caught the incredible moment a light aircraft crashed on a Florida road right next to his police car.

The incident happened last Sunday in Clearwater, Florida, where two cars from the Pinellas County sheriff’s office were responding to an entirely unrelated call when the small fixed-wing private plane crashed on to a busy public road. Thankfully no one was injured in the dramatic incident and the police were able to respond straight away.

The small town is on the west coast of Florida in Tampa Bay, around 40 miles west of Orlando.

Local authorities have since revealed that the owner of the aircraft – a four-seater 1975 Rockwell International 112A fixed wing, single-engine aircraft – was piloting the airplane at the time of the crash.

Marc Benedict was accompanied by an unidentified passenger at the time, and police say both Benedict and his passenger walked away from the incident with no injuries. No one on the ground was hurt either, despite the landing taking place on a major route through the municipality.

The plane had taken off from Clearwater’s small local airport and headed 30 miles east to nearby Zephyrhills to refuel, the pilot told police, and was on its way back when it got into trouble on approach to Clearwater at 10.23am local time on Sunday 19 November. The crash happened less than 900 metres away from the airport.

Benedict has reported that the plane was suffering from engine problems as it approached the small town and he was looking for clear space in which he could safely crash-land the plane. As he neared the road, the plane clipped a tree and went into a spin.