The plug-in hybrid shares its platform with another Chinese saloon, the Roewe i6.

MG has officially unveiled its next-generation 6 saloon at the Guangzhou motor show in China. The car is set to go on sale in its home market before arriving in the UK in 2018 for sale here.

MG is a sub-brand of state-owned Chinese car maker SAIC, which also builds Maxus, MG, Roewe and Yuejin models. The MG6 is based on the same platform that also underpins another SAIC model, the Roewe i6 saloon.

The new MG6 becomes the first vehicle from the British-branded company to feature a plug-in hybrid powertrain. According to the official press information, it consists of a 1-litre three-cylinder petrol engine paired with an electric motor, generating a combined output of 228bhp and 458lb ft of torque. Perhaps most impressively, on paper, the saloon returns 157mpg, though we're not sure what that figure would translate to on the European NEDC test. 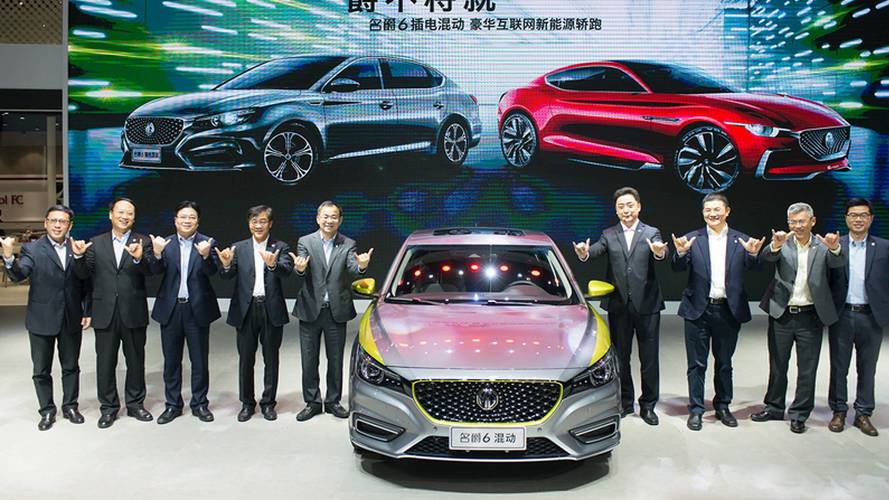 According to the latest reports, the MG6 is set to be made available with the 1-litre engine on its own, as well as a larger 1.5-litre turbocharged unit producing 165bhp that can also be found in the GS SUV.

Aimed at young customers, the new MG6 comes with internet connectivity for the Chinese market, based on a new system SAIC is using across its model lineup, as well as a voice control function. The look of the interior is a bit more upmarket over previous models, with a leather interior and aluminium-effect highlights. The interior also features a dual-screen layout with a digital instrument cluster and a 10.1-inch display for the infotainment system.

Part of the standard equipment is an electronic parking brake, while optionally available will be something that SAIC describes as a 'remote control driving system,' allowing drivers to control the car at low speeds via a mobile application. It's expected that the UK version of the new MG6 will debut at the London motor show next year, where the saloon will be revealed alongside the second-generation MG3.