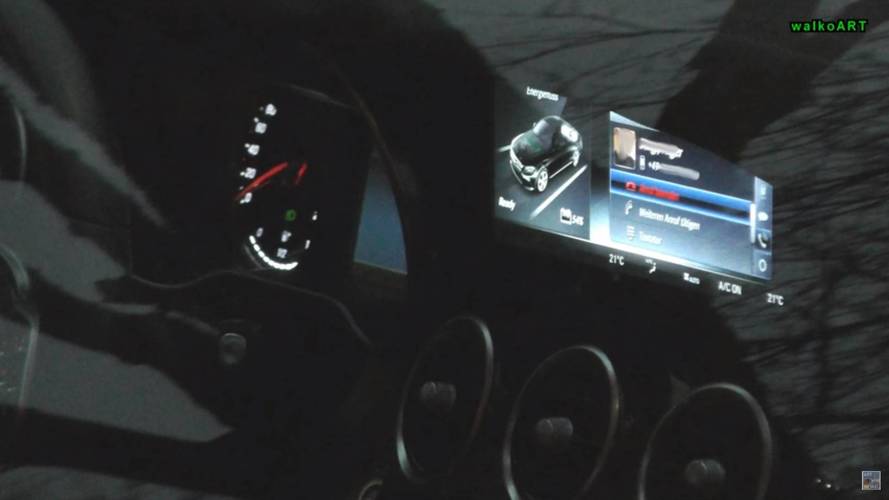 Having been spotted a week ago with barely any camouflage (see spy photos below), it means the official reveal of the 2018 Mercedes C-Class is likely right around the corner. The latest rumours suggest the car will debut at the Detroit motor show in January 2018, and the mid-life facelift for the premium saloon will bring an assortment of changes both inside and out.

For starters, this prototype was caught by our spy cameras in Germany the other day undergoing final testing while failing to hide its new Comand infotainment system with wider display. Fans of the three-pointed star badge will remember this setup, as it has already been previewed by Mercedes through the near-production GLC F-Cell introduced earlier this year at the Frankfurt motor show.

The biggest screen available in the outgoing C-Class measures 8.4 inches whereas the one in the aforementioned hydrogen-powered crossover has a 10.25-inch size. The updated saloon is also expected to inherit the new multifunction touchpad with handwriting recognition. While this test vehicle spotted had analogue dials in its instrument cluster, there’s a good chance that the 2018 C-Class will be available with a fully digital 12.3-inch setup as an option, as seen in the GLC F-Cell model that recently went into production.

Stepping outside of the vehicle, you will notice the information on the rear bumper revealing the prototype in question was the thrifty C350 plug-in hybrid. There are going to be updated graphics for the all-LED rear lights, along with new Multibeam LED headlights derived from those of the bigger E-Class model. Underneath the bonnet, Mercedes could be installing its new OM 654 four-cylinder turbodiesel engine that is borrowed from the E.

Following the saloon's premiere in January, the estate version of the car will likely be unveiled a couple of months later in Geneva in March 2018 and should be shortly followed by the coupe and cabriolet versions too.