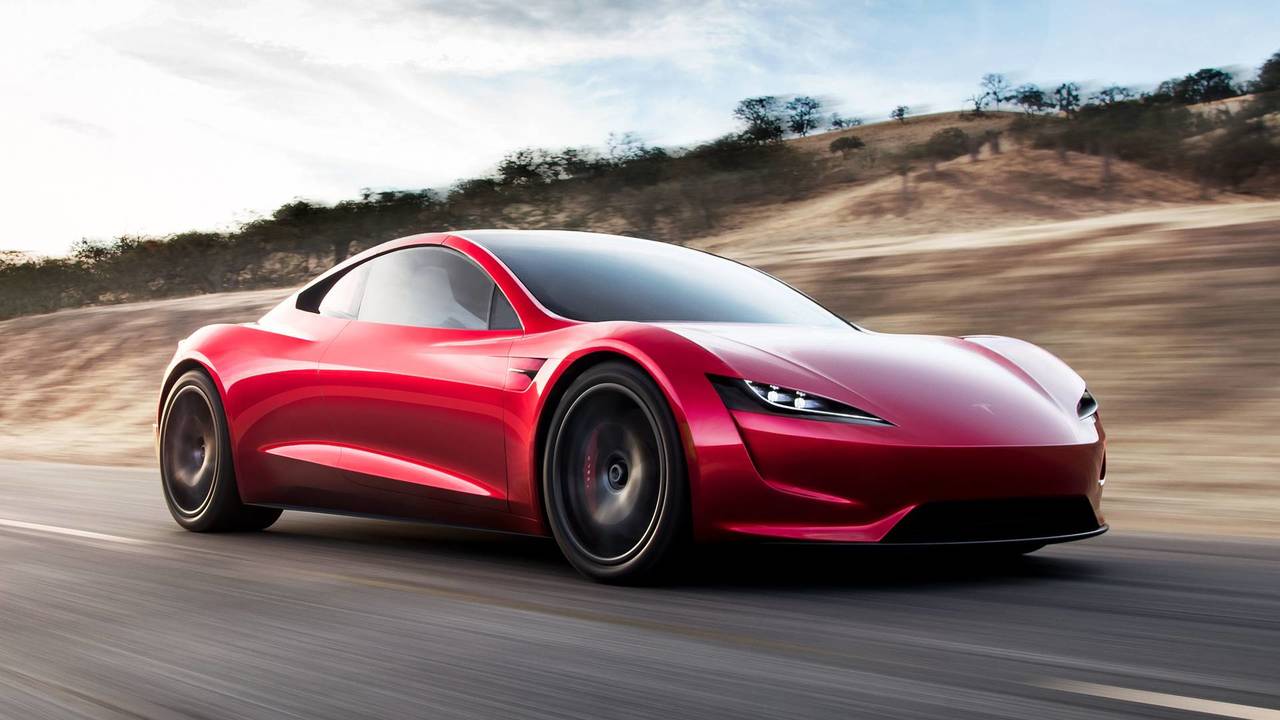 The 'Just one more thing' mantle has been passed on...

Elon Musk has revealed a new model that everyone was expecting, but also one they weren't. At a special event in California to reveal the new Tesla Semi truck, a surprise was driven out of the back of the trailer unit in the form of a new Tesla Roadster model.

The first-generation Roadster was Tesla's first car, a rebadged Lotus Elise with an electric powertrain. The new sports car will be on the road by 2020, said Musk, with some staggering performance numbers. Musk claims the new car will be capable of 0-60mph in 1.9 seconds, 0-100mph in 4.2 seconds and a 250mph top speed. Range of the Tesla Roadster is expected to be around 620 miles it was also said at the event. The car has four seats – although it's intended more as a 2+2 model – and a removable glass roof.

The new Roadster will use three electric motors – one at the front and two at the back – that will give it all-wheel drive. The power comes courtesy of a beefy 200kWh battery. Tesla claims an astonishing 7,376lb ft of torque from the car's powertrain – we may literally see the car tearing up the tarmac when it goes on sale. The US price of the new Roadster was announced at £151,000 – but there's no word yet on when the car might come to the UK and what it might cost.

There was certainly excitement at the press conference for the new car – Musk offered runs in the prototype of the new Roadster for anyone who fancied putting down a £38,000 deposit on the sports car, of which more than a few people were willing.

Check out the Tesla Roadster gallery at the bottom of the page.

In announcing the new Tesla Semi, Musk said that the truck would be 20 percent cheaper per mile to run than a diesel lorry, that it would be capable of 500 miles of range at a steady motorway speed and that new technology developed by Tesla would mean an end to jackknifing. The new HGV does also have autopilot, so we wait in eager anticipation at some of the imaginative things electric truckers come up with to do in their cabins while the lorry drivers itself.

The new HGV is strictly a day vehicle, with no cabin available for drivers to sleep in the back. The driver sits in the middle of the car flanked by two extra seats on either side.

Musk also said that the company plans to open a new network of so-called 'mega-chargers' that will add 400 miles of range to the truck's batteries in 30 minutes. He said it would be 'economic suicide' to continue running a diesel-powered lorry, and also claimed that running the new Tesla Semi in convoy would be cheaper than shipping goods by rail. The latest Tesla technology will mean that a series of trucks can be linked, with just one driver sitting in the lead vehicle.

Tesla has been under pressure for a number of weeks now over its inability to produce a full-year profit and production delays around the new Model 3 that have seen deliveries promised in the final quarter of 2017 being pushed back months into 2018. Analysts are now even more concerned at the expansion of the Tesla range while it's still suffering from technical hiccups.

In the third quarter of 2017, the company produced just 260 Model 3s – well below the 1,500 it had promised in August. Reports in the US have indicated considerable problems with Tesla's automated production line, as well as quality control issues that have meant dozens of cars being kept in storage because they're defective.