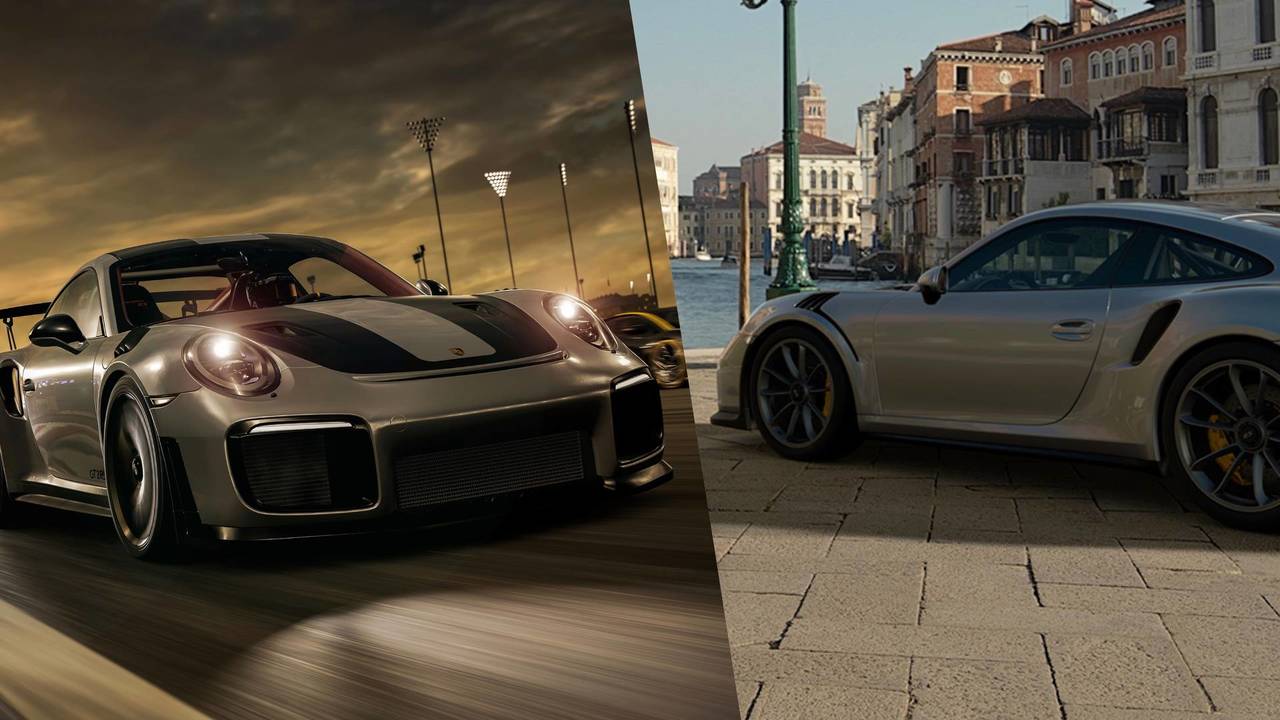 The rivalry between PlayStation and Xbox is similar to that of top Premiership football teams. Each studio works at capacity for years perfecting their craft, whilst fans passionately support their efforts. Gran Turismo Sport and Forza Motorsport 7 represent the very best four wheeled entertainment on each console. But which is best?

We could be here for weeks dissecting every polygon, each shadow and the many gigabits of data that form these games. To make things more digestible we have broken each contender down into four categories. Graphics, cars and tracks, gameplay and the ultimate verdict.

Both Gran Turismo Sport and Forza Motorsport 7 look incredible. In each the cars are the stars rendered in true anorak detail. There’s not a dust cap out of place in either game and the models are absolutely accurate to their real life counterparts.

Forza 7 runs at 60 frames per second in glorious 4K. From the mountains of Switzerland to the tyre walls of Silverstone, it’s quite the achievement. It may have taken seven incarnations before loyal Forza fans received dynamic weather, but it was worth the wait. The cars look beautiful drenched with sunlight refracting off water droplets, the same goes for the tracks.

Gran Turismo has been doing weather for a while now and, as you might expect, does it rather well. Time and experience has resulted in near photorealistic 4K lighting that trumps Forza’s slightly glossier magazine page look. GT also has an advantage when it comes to foliage such as people in the crowds or trees. However, the tides turn when talking about the textures that actually make up this virtual world. Here Forza has a distinct advantage. Things such as grass, asphalt and rumble strips are more realistic.

Graphically both games look gorgeous, but this continuous punch and counter punch fight is settled when you take a magnifying glass to the cars. As mentioned, the models in both games are very detailed, but the makers of GT Sport have gone to extreme lengths to produce some of the most realistic virtual cars ever. Zooming right into seemingly unimportant things such as windscreen washer jets reveals intricacies that Forza is lacking. In FM7 the jets are there, but in Gran Turismo you can actually see the tiny components that make them up.

If you want a definitive winner of this round you have to really nitpick, but ultimately Gran Turismo Sport takes it.

Gran Turismo Sport might have the most detailed cars, but it has fewer of them when compared with Forza Motorsport 7. Over 700 for Forza vs 162 in Gran Turismo. That is a low car count on GT’s part even by their own standards — Gran Turismo 6 boasted over 1,000 different models and variations.

The final nail in the coffin for GT Sport is Forza’s sheer variety of cars. Everything from classic F1 legends to racing trucks can be collected in Forza 7, whilst GT Sport sticks to a more midget diet of racing cars and selected road models.

It’s the same story with the tracks. Gran Turismo brings 17 to the table, whereas Forza delivers 30.

The Forza Motorsport series has always attracted a wide range of gamers. From the novice perched at the end of their bed, to simulation fans with the latest gaming rig, everyone has a seat at the Forza table. The vast array of settings means that you can tweak the game to be anything from bumper cars to an accurate recreation of a WEC endurance race.

Gran Turismo is much more focused on the hardcore enthusiast. There are various driving aids to help you, but largely you are on your own. This makes GT the ideal platform for those purely looking for a simulator. In fact, Gran Turismo has a proven track record of turning its best players into real racing drivers.

Which is the most enjoyable comes down to your personal preference. If you take pleasure in spending hours perfecting your lap of Silverstone, Gran Turismo ticks the box for you. However, Forza mixes its serious races with Top Gear style stunts that are often pretty amusing. FM7 also offers a more structured single player experience with clear progression through the ranks.

On the basis of longevity and entertainment, Forza Motorsport 7 is the better game overall.

Each game has its merits, and its own USP. Forza Motorsport 7 is a destination that car nuts will enjoy no matter their skill level, whilst Gran Turismo Sport prides itself on being one of the most accurate simulations of driving out there.

Ultimately FM7 wins out. Why? Because there is more of it. We know people who cancelled their preorders of Gran Turismo Sport when the content list was revealed. It’s understandable that GT has come to the party with less cars and tracks because much of the game has been built from the ground up. That said, we’d rather the game launched later being more complete than what feels like ‘diet’ Gran Turismo.

GT Sport is mighty impressive, especially when using a VR headset, but Forza 7 is the more complete offering here.