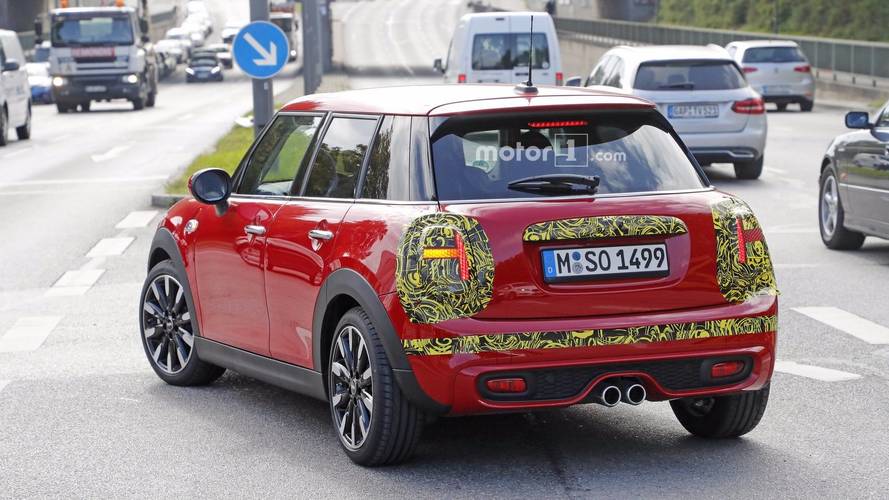 The other styling changes prepared for the exterior will be subtle.

The Mini brand has proven to be a remarkably stretchy one, but the thing that will almost definitely probably not change is the fact that a Mini will continue to look like a Mini. Especially not when we're approach a mere mid-life facelift, as we are with the current Mini Hatch.

The light amount of camouflage on the model we've caught testing in Germany indicates the cosmetic updates will be kept to a minimum for the newly facelifted model that is slated to debut in the first half of 2018.

Our spies have caught on camera a barely disguised prototype of the Cooper S with the black and yellow swirly pattern applied on and around the lights. You will likely have a hard time identifying the changes made to those LED headlights, but it seems the inner circle will be replaced by an oval light signature. Pretty exciting, isn’t it?

It’s a different story at the back where the taillights will be revamped by getting the Union Jack motif that has been available for quite some time for other different parts of the body, such as the roof and wing mirror caps. To get an idea about the design of the rear lights, then look no further than the John Cooper Works GP concept that was introduced in September 2017 at the Frankfurt motor show. Of course, these new versions won’t have quite the same look, but they should be similar.

More camouflage has been applied to the rear bumper in line with where the parking sensors should be, and you can also see it on the plastic trim for the tailgate handle, but it seems unlikely there are actually some important changes hiding underneath.

Some fresh alloy wheel designs along with a few new paint colour options will round off the changes on the outside. As for the interior, the modifications should be discreet and could include new trim and upholstery options, along with an updated infotainment system. We're not expecting any major changes to the engine options on the new car, but they should all generate lower CO2 emissions as BMW continues to make tweaks. Depending on engine choice, there will be a choice of eight-speed automatic transmission as well as a new seven-speed dual clutch or manual gearbox.

We should get to see the updated Mini at the Geneva motor show in March 2018.