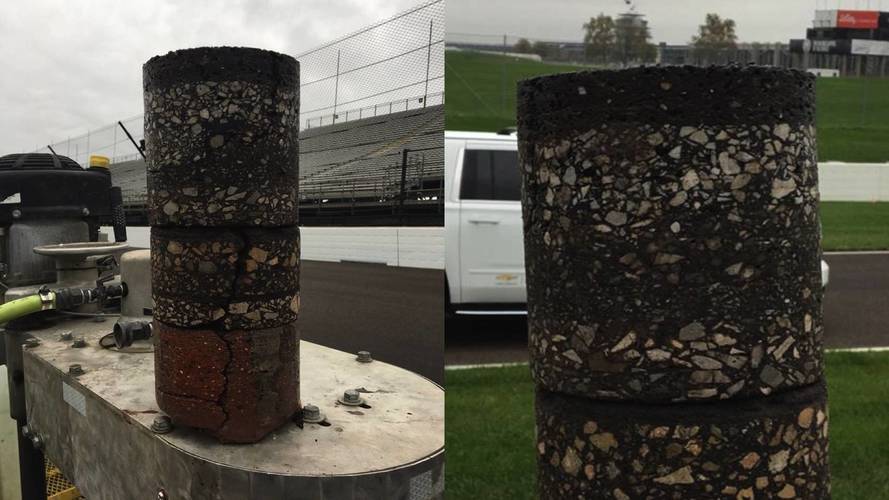 That's a lot of repaving.

In its 108-year history, the Indianapolis Motor Speedway has been paved, repaved and paved again in the ongoing pursuit of driveable road. Last week we were able to get firsthand look at exactly how much the track has been resurfaced, and all of the materials inside of it courtesy of one massive core sample.

The sample was tweeted out on the speedway’s official Twitter account, and shows the core sample fresh out of the ground, with a photoshopped image alongside it detailing all of the contents – from the original creek gravel, to the modern asphalt that lays atop the track today.

The bottom layer, as seen in the image above, is a 4cm-inch thick layer of creek gravel, followed by 4cm of crushed limestone, followed by a 1.5cm coating of crushed stone chips mixed with larger stones. In 1909, the track underwent its first major renovation, and was covered in a 4cm layer of sand to fix the damaged surface.

That same year, the first layer of brick was laid onto the sand. The bricks were separated by approximately one-quarter of an inch, with a mixture of sand and Portland cement poured between the cracks for 'fixing'. It was in 1961 that the bricks were covered up by the track's first layer of asphalt. The only remaining memory of the original brick was the three-foot strip at the start/finish line, which remains to this day.

The most recent repaving came in 2004. The entire 2.5-mile oval surface, pit lane and warm-up lane were recovered. Approximately 5cm of asphalt was removed from the surface prior to the extensive repaving. All told, the track was repaved eight times in various different materials. The core sample is an astonishing look at the iconic race track's history.