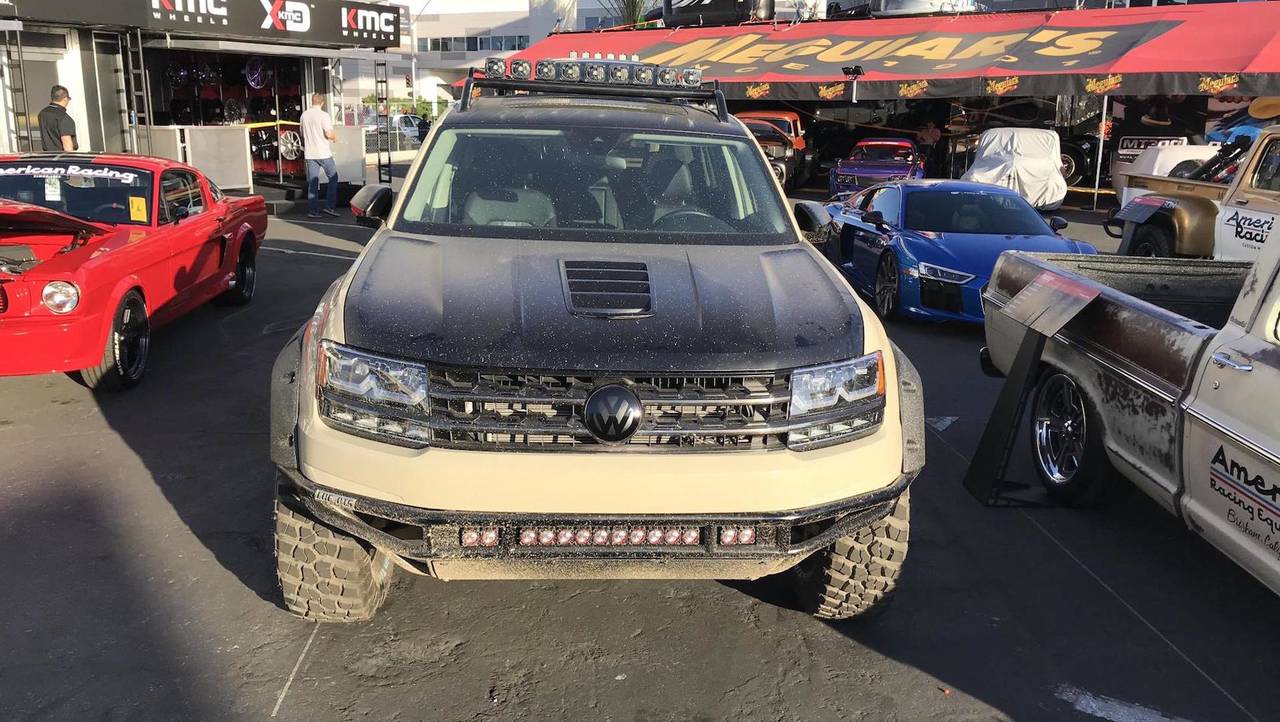 Tanner Foust and Scott Speed have one hell of a toy box.

Tanner Foust has showcased a pair of stunning Volkswagen concept cars at SEMA in Las Vegas.

The former Top Gear USA host races for Volkswagen Andretti Rallycross in the Red Bull Global Rallycross championship, and has been behind a number of one-offs for the aftermarket car show over the years. This year is no different, and Foust has teamed up with Volkswagen and a number of suppliers to produce a pair of striking concepts.

The first is an Atlas overland concept. The US-exclusive SUV was modified by the custom truck division of LGE*CTS Motorsports in San Dimas, California and features a lifted and beefed up body supported by a set of KMC XD Series Bully wheels and BF Goodrich Mud Terrain tires.

'It's a vehicle that makes me want to get out and have an adventure,' said Foust of the Atlas overland concept. 'I'm looking forward to getting my Volkswagen Atlas back from the SEMA Show and taking an epic road trip. Maybe I'll take the long way home.'

Foust's second creation for this year's SEMA show is a rally-inspired Golf GTI developed in conjunction with Nexen Tire and performance specialists Mountune.

The Golf features a whole hos of performance upgrades, including strategic upgrades to the intake and exhaust systems, fully adjustable KW coilover suspension, and Tarox performance brakes. The Mountune m350TFR, as it is known, produces 345bhp, and more than 400lb ft of torque.

'I wanted a GTI that I could street drive reliably, but that still packs a punch,' said Foust. 'It has been fun to work with my friends at mountune again on this special project for the 2017 SEMA Show.'

Foust isn't the only driver that has taken modified VWs to SEMA. His Red Bull GRC team mate Scott Speed has also been hard at work coming up with a pair of concepts for the show. Speed has come up with a pair of Golfs. An eGolf (below) that was also developed in conjunction with Nexen Tire, and a track-ready Golf GTI built with GReddy Performance that features a full roll cage, Brembo brakes, and striking blue Volk Racing wheels.