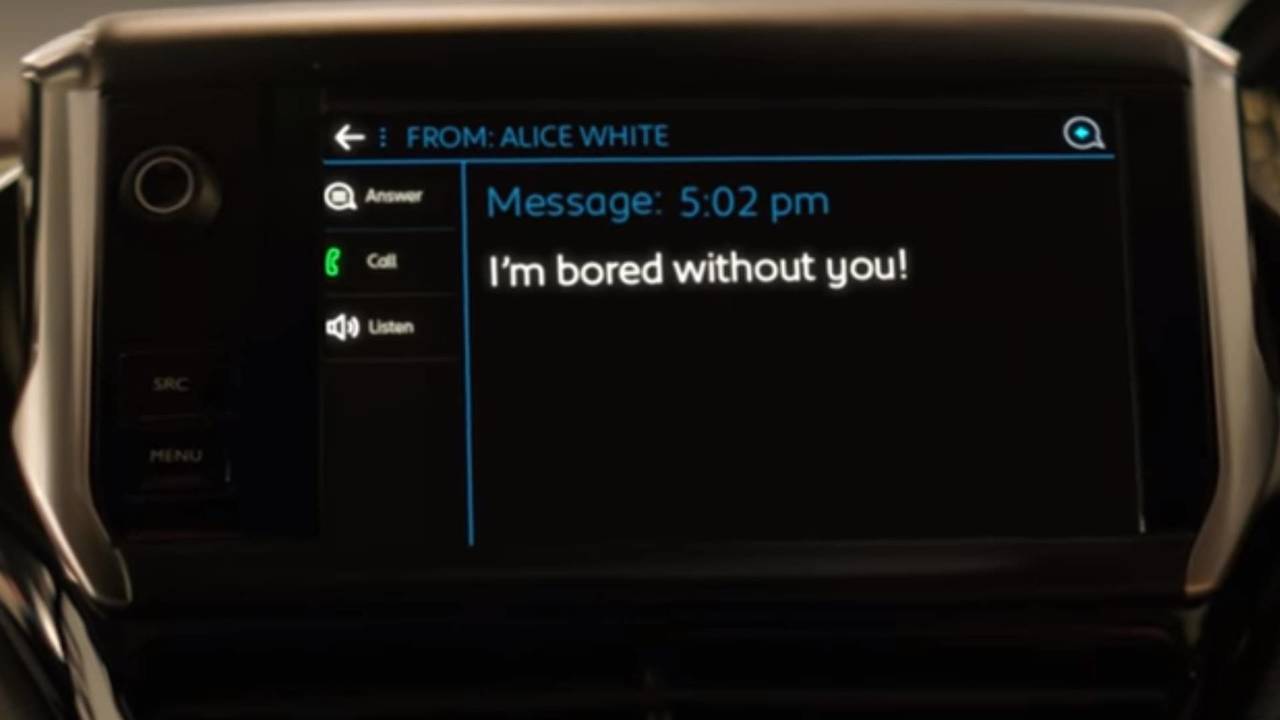 A Peugeot TV advertisement has been banned after the advertising regulators said it showed a driver being distracted by an incoming text message.

The advert, which was designed to advertise the connected technology fitted to the Peugeot 208 Allure Premium, showed a man driving while reading a text message that popped up on a screen built into the car’s dashboard.

The Advertising Standards Agency (ASA) said that five people ‘challenged whether the ad was irresponsible’, suggesting that it showed ‘driving behaviour prejudicial to safety’.

Speaking in defence of both itself and Peugeot, Clearcast told the ASA that ‘momentarily’ reading a message on a screen in the dashboard was ‘no worse and arguably less distracting’ than adjusting the radio. It also reiterated that the driver was ‘exercising proper control and was not distracted from the road’.

Peugeot, meanwhile, clarified that the screen displaying the message was ‘at an angle which avoided driver distraction’.

Nevertheless, the ASA upheld the complaints, pointing out that the Highway Code advised drivers that using hands-free equipment was ‘likely to distract your attention from the road’.

The ASA said: ‘We considered that, to show a driver reading a text message (which, even at the eye level at which it was shown in the ad, would have inevitably diverted his attention from the road ahead) and then reacting to it, amounted to a distraction that would have prevented him being aware of, and/or being in control of, other actions that were necessary for safe driving.’

The ASA ruled that the advert ‘must not be broadcast’ again in its current form.

A statement from Peugeot read: ‘While Peugeot accepts the ASA ruling, it refutes that the TV ad in any way condoned dangerous or irresponsible driving.

‘The hands-free use of the mobile phone depicted in the advert shows the driver fleetingly using the indicator stalk to read the text message on the screen. This, in Peugeot’s view, is no different or distracting than the standard operation of indicators.

‘In addition, the Peugeot i-Cockpit system allows the driver to have a received text message read out, avoiding distraction even further – the only reason this was not depicted in the TV ad is because it would have interrupted the advert’s music soundtrack.

‘Peugeot will review any further use of the TV ad based on the ASA’s ruling.’

Beyond the immediate implications for Peugeot and other advertisers, however, the issue has raised important questions about the possibility of distractions caused by increasingly connected cars.

In its ruling, the ASA pointed out that the Highway Code advises drivers to avoid distractions such as ‘starting or adjusting any music or radio’, while it says there is a ‘danger of driver distraction being caused by in-vehicle systems such as satellite navigation systems, congestion warning systems, PCs, multi-media, etc.’.

The RAC is particularly concerned about the issue and called on the government to clarify what it considers to be appropriate interactive in-car technology.

The organisation’s road safety spokesman, Pete Williams, said: ‘We have real concerns about any technology which has the potential to distract a driver’s focus from the road. They already face enough distractions both inside and outside the car.

‘Technology should be used to the benefit of road safety, not to its detriment. We would urge all car manufacturers to make this their guiding principle when considering the functionality and applications they incorporate in their latest models. And we call on the government to make clear recommendations on what is, and what is not, appropriate when it comes to interactive technology.

‘We welcomed the introduction of Apple’s “Do Not Disturb While Driving” mode, however we are aware that some so-called “infotainment” screens still allow notifications and alerts, which have the potential to be highly distracting.’