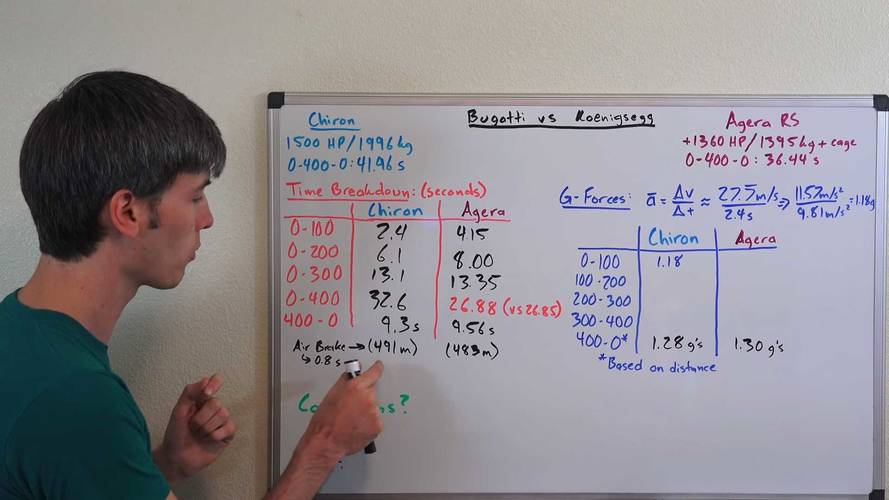 An analysis of the numbers shows the Agera RS is crazy quick above 200 mph.

We love a bit of science – we might not necessarily understand it, but that doesn't make it any the less fascinating. Those clever chaps at Engineering Explained have created a video that explains exactly how the Koenigsegg Agera RS managed to beat the Bugatti Chiron in the recent titanic battle to post the fastest 0-400-0 time the world has ever seen.

What makes this particularly interesting is that, looking at the numbers, we can not only see that the Agera is faster, but exactly where and how it’s faster. We suspect that information might be surprising to most of you, especially when G-forces are factored in. G-forces? Yes, the video uses fantastically complicated equations to even determine how hard each car was accelerating against gravity.

Koenigsegg said that there were traction issues during the run and it’s easily reflected in the numbers. The rear-wheel drive Agera was initially much slower to 62mph than the all-wheel-drive Chiron, but once the tyres connected to the asphalt, it was all about the wily Agera.

As mentioned in the video, it's above the heady speed of 186mph where Koenigsegg really won the competition, which Engineering Explained attributes to the Agera’s lighter weight, better aerodynamics and rear-wheel-drive layout. All of these things add up to ensure that the Swedish hypercar could get more of the engine's power from the engine to the ground. It goes to show that it isn't in fact about the amount of power that you have, but the way that you use it.

In any case, it’s starting to look like the 0-400-0 battle will become the new benchmark for crazy-fast hypercars. Hennessey has been teasing its Venom F5 as a car that can best the Chiron’s as-yet-unknown ultimate top speed, so an F5 0-400-0 run seems almost a no-brainer. And then who next after that? This one could be set to run and run. Watch the video below.